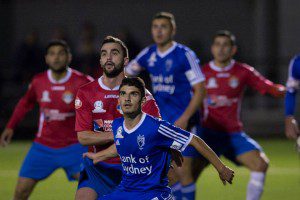 It’s the penultimate weekend in the men’s 1 competition. Picture courtesy of Football NSW

It is a do or die weekend in the penultimate round of  the IGA National Premier League NSW Mens 1 soccer competition.

With Blacktown City having safely secured their passage through to the grand final on September 14 at Sydney United Sports Centre, it is now up to Bonnyrigg White Eagles and Sydney Olympic to contest the right to play on the big day.

Bonnyrigg White Eagles, the competition premiers, take on Sydney Olympic in the elimination semi-final on Sunday.

Kick off is at 3.45pm at Lilys Football Centre.

The match will be hosted by, ironically, Blacktown City, who will play the winner of this match in the grand final.

A last minute goal by Robbie Younis in the final round against Olympic sent them to the top of the table at the last possible moment, overtaking Blacktown Spartans and earning a weekend off.

Whether the weekend off halted their momentum or not, they fluffed their lines in last week’s match against Blacktown City at Lambert Park.

In a match that only really opened up in the final quarter of an hour, the White Eagles went down 1-0 when a Chris Tadrosse handball in the last minute gifted Blacktown City a penalty that was converted by Kearyn Baccus.

It condemned them to this match against an Olympic side that pushed them all the way in that final round and match and who, for 91′ minutes, looked like they would be the ultimate party spoilers. The White Eagles’ win strike force of Younis and Aaron Peterson is enough to test anybody though and they will ensure Olympic’s defenders are in a contest.

There is a question mark over goalkeeper Matthew Nash, who is nursing an injured groin sustained in that match against Olympic, but youngster Tristan Prendergast deputised in that match and against Blacktown City to superb effect, showing why he is one of the most promising young goalkeepers going around.

Sydney Olympic have gone from contenders for the top five to genuine championship contenders in the space of three weeks. With their fourth place finish guaranteed they took on Bonnyrigg in that final round and refused to roll over.

That was enough to pit them in an elimination semi final against Rockdale City in week one of the finals and they prevailed 2-1, but it was not without some scares as they say deep in the second half. Paul Henderson’s experience got them through that night and he kept them in their second finals match against a rampant Blacktown Spartans.

The Spartans were trying to recover from conceding ten goals in a fortnight against Blacktown City and threw the kitchen sink at Olympic, only to find Henderson standing firm. It was a good job that he did, because in the second half Olympic ran riot and ended up winning by three goals to nil, knocking out Spartans and setting up this date with destiny against Olympic.

Undoubtedly the two players to watch are Taiga Soeda and Go Shirai, who have had sensational seasons in midfield, attacking with verve and creating opportunities for Harris Gaitatzis and Dimitri Hatzimouratis in attack.

Their foil, Ryan Keir, will miss the match through suspension and his loss will be keenly felt. Keir is the battery in the Olympic watch and whoever steps into the deep midfield role will have to try and dictate the tempo.

Make no mistake though, Olympic are not underdogs here, they are proper contenders and this match could well go the distance.

Whoever progresses to take on Blacktown City will truly have earned the right.

More than 40 years experience in the news media, most of them as editor of local newspapers across the Sydney metro area, but a few years working as a sub-editor with the metros. Lots of awards, both as a reporter and editor, but says he values just as much Community Service Awards from Campbelltown City Council in 2004 and 2016. Took a voluntary redundancy in 2014 from Fairfax Community Newspapers after 21 years there. Loves the digital world, because ''there's no question it's the future''. Eric promises his hard hitting but fair approach won't change when he reports the news via cyber space.
View all posts by Eric Kontos
Slammed: ambulance backlogs at local hospitals
Mayor backs community group library space freebie