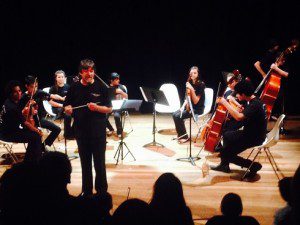 The maestro of Macarthur and his L’Estro Armonico String Orchestra will dazzle audiences again when they perform at a concert in Mater Dei school later this month.

Polish born George Kowalik is the maestro who will conduct the talented orchestra in another Strictly Strings concert.

It follows a first concert on November 1 at the Campbelltown arts centre performance space which received sustained applause from the audience. They performed a variety of works, from Handel to Bach, as well as the famous Irish folk song Danny Boy.

Kowalik’s String Orchestra is made up of his own students, and is part of the maestro’s path for them to excelling as string players.

The artistic director is himself a violist and violinist, who graduated from the Chopin Academy of Music in Warsaw, Poland.

As a performer he has worked in orchestras in Poland and other countries, including Mexco and of course Australia, as the principal violist.

In addition to conducting the orchestra at concert performances, he also teaches  violin at St Peters Anglican Primary School and Macarthur Anglican, as well as in his private studio.

The school is located in 229 Macquarie Road, Camden.

To book your seats call Janette Aguilar on 0425 310 348 or email lestroarmonicostringorchestra@gmail.com.