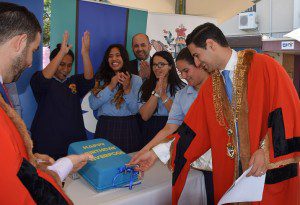 Mayor Ned Mannoun cuts a cake to celebrate the 204th anniversary of the foundation of Liverpool by Governor Lachlan Macquarie. With him are fellow councilors and students from Liverpool Girls High. The mayor also announced the recipients of the 2014 Order of Liverpool awards.

Macquarie Mall was the venue for this year’s foundation of Liverpool celebrations.

It combined a citizenship ceremony and the naming of this year’s recipients of Order of Liverpool honours.

The formalities included a commemorative cake cutting to celebrate the official day of when Liverpool was founded.

Those named in the 2014 Order of Liverpool honours will be presented with their medals on Australia Day, January 26, 2015. Liverpool Council last month decided to hold just one award ceremony on Australia Day.

There were two people named Companion of the Order of Liverpool, the highest level of these honours, Kevin Perry and Sean Matthew William Langshaw.

Kevin Perry has served on the Liverpool Justices Association and mentors all new Justices of the Peace in Liverpool. In his work with the Lions Clubs he’s been involved with many fundraising activities including raising funds for Liverpool Hospital. As a licensed bus driver, Kevin volunteered and drove guests visiting from Quota on many trips.

Sean Matthew William Langshaw is a member of Liverpool Access Committee and has been a strong advocate for people with a disability in the Liverpool community for over 20 years. He is involved with the Liverpool Youth Needs Committee as a Public Officer. Sean serves as a Justice of the Peace and is a member with South West Community Transport.

Named Officer of the Order of Liverpool was Josef Stanios, who has served the NSW Police Force from 1970 to 2002.  He is the author of “The Child Protection Services Book” for the NSW Police Force. In 2004 Josef became Liverpool’s representative for Bear Cottage, which is a palliative care centre for children suffering from terminal illnesses. He has assisted Liverpool Lioness and Lions Clubs on numerous occasions.

Three residents were made Members of the Order of Liverpool,  Dawn Madden,  Guiseppe Callipari and Gina Sinozich.

Dawn Madden has been doing volunteer work at the Lurnea Neighbourhood Centre since 1993 and has been a member of the Lurnea Seniors since 1993. She also helps out with playgroups and is well respected by the parents of those in her care.

Guiseppe Callipari is a member of the Liverpool Greenway Rotary Club. He has been involved in the Rotary Club as treasurer assisting in raising funds for many organisations including Liverpool Hospital.

Gina Sinozich has done voluntary teaching in the field of art with the Migrant Resource Centre of Liverpool. She has also won numerous awards for her paintings.

More than 40 years experience in the news media, most of them as editor of local newspapers across the Sydney metro area, but a few years working as a sub-editor with the metros. Lots of awards, both as a reporter and editor, but says he values just as much Community Service Awards from Campbelltown City Council in 2004 and 2016. Took a voluntary redundancy in 2014 from Fairfax Community Newspapers after 21 years there. Loves the digital world, because ''there's no question it's the future''. Eric promises his hard hitting but fair approach won't change when he reports the news via cyber space.
View all posts by Eric Kontos
M5 third lane almost all done
Maestro and his string orchestra at Mater Dei next