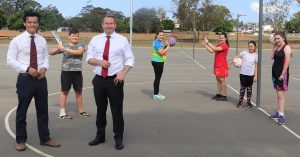 An early ACL injury is painful, costly and can lead to long term health issues, with lasting impacts on employment and ability to exercise, says local MP Anoulack Chanthivong.

“Prevention is the key,’’ says the member for Macquarie Fields, who this week joined his parliamentary colleague, Greg Warren, to announce Labor’s program to help prevent ACL injuries in young sportspeople.

A number of local young sportspeople joined the two MPs at Coronation Park netball courts in Minto for the announcement.

Labor’s plan will implement a $2 million neuromuscular training program, aimed at reducing the incidences of ACL injuries in 12-25 year olds.

“If the government can find $2.3 billion for Sydney stadiums it should be able to allocate funds to protecting young sportspeople and preventing lifelong injuries.

“With an increasing number of children participating in competitive sport in our local area, Labor’s policy is a winner for kids’ health.”

Typically the ACL ruptures when someone changes direction at speed while playing a multidirectional sport.

Australia has one of the highest rates of ACL injuries in the world with approximately 72 per cent of ruptures sport related.

ACL injuries increase rapidly during the early teenage years and peak between the ages of 15 and 25.

Research shows girls and women are two to 10 times more likely to rupture their ACL when participating in high-risk sports.

Costly knee reconstructions are most often required following this injury and the person can suffer lifelong consequences; almost all athletes who tear their ACL are at increased risk of osteoarthritis later in life. 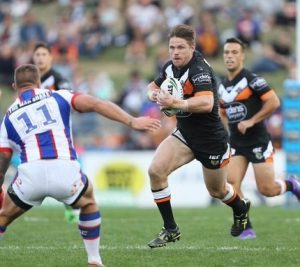 ACL injuries are more likely to occur during high risk sports such as rugby league.

Despite sport related knee injuries in Australia increasing by five per cent a year, ACL injury is largely preventable.

Neuromuscular training programs are proven to prevent 50-80 per cent of ACL injuries by teaching the body better habits for knee stability by training how the knee moves, especially when jumping, landing and pivoting.

Trials have shown that a youth sports injury prevention program would reduce the risk of ACL injuries in females by 52 per cent and 85 per cent in males.

Labor’s ACL injury prevention plan will incorporate a smart app 15 minute pre-training program for high-risk sports as well as a Training the Trainer program to run alongside the smart app.

The program will also have the capability to follow up with teams and track the app’s use.

“Like anything, prevention is the best cure and that’s exactly what this policy aims to do,’’ says the member for Campbelltown, Greg Warren.

“Those who suffer ACL injuries often require surgery and an extended period off work or school.

“That creates financial, mental health and physical health stress for both the individual and those who care for them.

“This 15 minute pre-training smart app is a cost-effective and practical solution that will help curb the rising rate of ACL injuries.”

More than 40 years experience in the news media, most of them as editor of local newspapers across the Sydney metro area, but a few years working as a sub-editor with the metros. Lots of awards, both as a reporter and editor, but says he values just as much Community Service Awards from Campbelltown City Council in 2004 and 2016. Took a voluntary redundancy in 2014 from Fairfax Community Newspapers after 21 years there. Loves the digital world, because ''there's no question it's the future''. Eric promises his hard hitting but fair approach won't change when he reports the news via cyber space.
View all posts by Eric Kontos
Academy netball coach shooting to the top of the pile
Campbelltown will cool down at its own Water Wonderland this summer