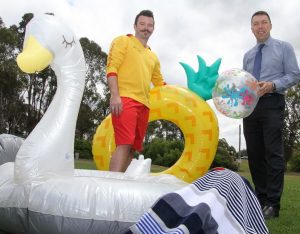 Last winter the residents of Campbelltown were able to enjoy a bit of ice skating for the first time and now they will get the chance to beat summer by cooling off in a giant waterpark.

Campbelltown City Council will partner with Water Wonderland to present a fun-filled waterpark at Bradbury Oval from December 29 to January 28.

Mayor of Campbelltown, Cr George Brticevic, said he was inspired by attending a similar event at Moore Park.

“This will be a fun and exciting addition to the area for the summer holidays and provide a place for people to cool off and enjoy without having to leave town,” Cr Brticevic said.

“Our residents have told us they want more water based activities and this is one way of bringing that experience to them while we explore plans to build a billabong next to Bradbury Oval.”

Cr Brticevic said the Water Wonderland was a natural follow-on from the success of the Winterland festival held during the July school holidays.

“Winterland was heartily embraced by the community with its winter wonderland themed rides, food trucks and ice skating,” he said.

“Water Wonderland will provide something similarly special for our residents during the summer school holidays as well as creating local employment opportunities.”

Water Wonderland will include a variety of inflatable water slides and activities as well as food stalls in a fun, carnival-like atmosphere.

The following YouTube clip provides a taste of what residents of Campbelltown can expect when water Wonderland comes to town. https://www.youtube.com/watch?v=5pbGs1WRXAo

More than 40 years experience in the news media, most of them as editor of local newspapers across the Sydney metro area, but a few years working as a sub-editor with the metros. Lots of awards, both as a reporter and editor, but says he values just as much Community Service Awards from Campbelltown City Council in 2004 and 2016. Took a voluntary redundancy in 2014 from Fairfax Community Newspapers after 21 years there. Loves the digital world, because ''there's no question it's the future''. Eric promises his hard hitting but fair approach won't change when he reports the news via cyber space.
View all posts by Eric Kontos
Local MPs back Labor plan to tackle ACL injuries
School to help parents become baristas