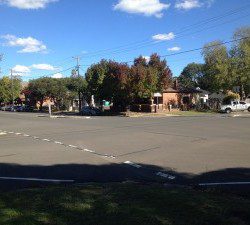 Blackspot: the intersection of Elizabeth and Mitchell Streets, Camden

Three local traffic blackspots, Elizabeth and Mitchell Streets, Camden, Allenby Road, Rossmore  and Wilton Road, Wilton will be fixed in the next 12 months.

The federal Government has allocated $293,000 to fix these dangerous blackspots.

The projects were recommended by a panel of independent road safety experts and will be delivered during the course of the 2015-16 financial year.

Assistant Minister for Infrastructure and Regional Development, Jamie Briggs, and Federal Member for Macarthur, Russell Matheson, announced the funding of $293,000.

“The good thing about the Blackspot Program is that anyone can suggest an intersection or section of road they believe should be considered for a safety upgrade”.

Mr Briggs said the Australian Government’s record commitment of $500 million to the program in the 2014 Budget would fix more roads than ever before and fast-track better roads.

“As a result of our additional investment, an extra 110 projects will be funded in NSW over 2015-16,” Mr Briggs said.

“Based on the outcomes typically delivered by blackspot projects, these extra projects are expected to save an additional 13 lives and prevent 671 injury crashes over 10 years, and deliver economic dividends of around $214 million.”

Further information and nomination  forms can be downloaded from: http://investment.infrastructure.gov.au/funding/blackspots/index.aspx

More than 40 years experience in the news media, most of them as editor of local newspapers across the Sydney metro area, but a few years working as a sub-editor with the metros. Lots of awards, both as a reporter and editor, but says he values just as much Community Service Awards from Campbelltown City Council in 2004 and 2016. Took a voluntary redundancy in 2014 from Fairfax Community Newspapers after 21 years there. Loves the digital world, because ''there's no question it's the future''. Eric promises his hard hitting but fair approach won't change when he reports the news via cyber space.
View all posts by Eric Kontos
Anzac Day casualties and other noise
Super hero top 100 list ticked me off