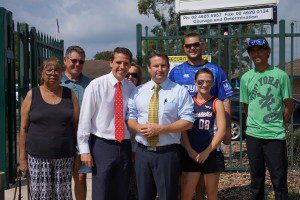 A Foley Labor Government will spend more than $12 million on local schools, says their candidate for Campbelltown, Greg Warren.

The schools set to benefit from this funding are:

“I’m very pleased to announce that I have been able to secure more than $12 million for Campbelltown schools,’’ Mr Warren said.

“This investment will give many of our local students new classrooms, libraries and a gymnasium.

“I have listened carefully to the community and locals have made it very clear – they want to see Labor investing in our schools.”

“This $12 million investment in Campbelltown schools comes without the need to privatise the state’s electricity network,’’ Mr Park said.

“Our plan is fully-funded and will see significant, much-needed improvements to these locals schools.’’