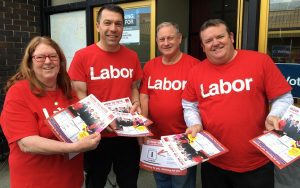 Early counting in the local government elections in Campbelltown has the Labor Party poised to win six or seven seats and a stranglehold on the mayor’s job for the next four years.

The ALP is receiving more than 40 per cent of the vote, giving it over six seats on the 15 member council.

The Liberal Party looks set to win three seats, receiving 18.6 per cent of the 2,587 votes counted so far.

Veteran councillor Fred Borg is on target to be reelected for another four year term, as is Cr Paul Lake.

More votes will need to be counted before either can be sure of getting their number two candidate up.

Cr Clinton Mead (Liberal Democrats) is on .54 of a quota, with Cr Bob Thompson (Independent Team) on .86.

The Christian Democrats (Fred Nile Group) are just short of a quota on .75 at this stage.

The Greens are on .85 of a quota and may be returning to council after a long absence.