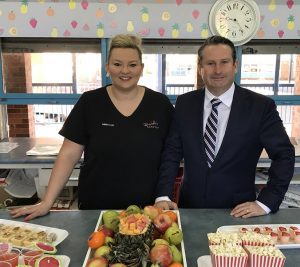 In Campbelltown, 27 percent of children are either overweight or obese according to the Public Health Information Development Unit.

It’s a number that experts predict will rise as the town population booms over the next 20 years.

But innovative ideas like healthy food in school canteens may have a positive impact on those numbers, says local MP Greg Warren.

He was speaking after visiting Campbelltown North Public School to see for himself Brooke’s Canteen, which offers healthier food options for students.

There he also met the woman behind the healthy venture, Brook Flanagan, who was recently featured in the South West Voice in Macarthur.

Mr Warren said the latest research confirmed the importance of establishing healthy eating habits in children from a young age.

“This is a really good initiative and I congratulate Ms Flanagan,’’ Mr Warren said.

“Campbelltown faces a growing population of overweight or obese children, which sadly leads to major health problems in the future.

“The great work being undertaken by Brooke with the support of Campbelltown North Public School is a terrific step in the right direction,” he said.

“I commend Brooke and those amongst the Campbelltown community like her who are seeking to help reverse the rise in obesity in our kids and teaching them the importance of healthy eating.”

Brooke’s Canteen was first established in 2016 and the feedback from both students and parents has been positive so far.

“Cooking healthy food for children is a passion of mine, and I love seeing their little faces light up with excitement when they see the fun, healthy food I have to offer on the counter every day,” Ms Flanagan said.

“Having been raised in Campbelltown, it is important to me that I can help promote healthy eating and healthy lifestyles wherever I can.

“Today was such an honour to have Greg Warren MP in one of my canteens – he is down to earth and approachable. He genuinely cares about the welfare of all students and we need more people like him.” 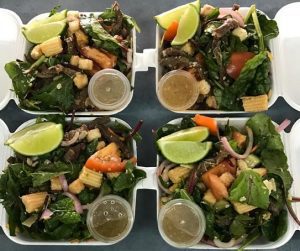 Some of the food served up at Brooke’s Canteen

More than 40 years experience in the news media, most of them as editor of local newspapers across the Sydney metro area, but a few years working as a sub-editor with the metros. Lots of awards, both as a reporter and editor, but says he values just as much Community Service Awards from Campbelltown City Council in 2004 and 2016. Took a voluntary redundancy in 2014 from Fairfax Community Newspapers after 21 years there. Loves the digital world, because ''there's no question it's the future''. Eric promises his hard hitting but fair approach won't change when he reports the news via cyber space.
View all posts by Eric Kontos
Former chamber chief to lead Camden’s economic taskforce
Moving out, but how far is too far when you have children