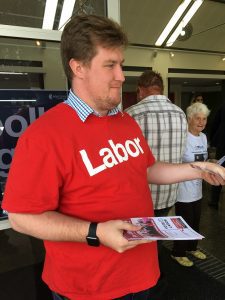 Vote for me: Labor candidate Ben Gilholme wants Campbelltown to become inclusive where people with disabilities are concerned.

Ben Gilholme won’t have a problem making the transition to a seat on the council chamber if he wins the Campbelltown byelection this Saturday.

The 25 year old candidate from Ingleburn has already been working with his Labor Party colleagues on council to make improvements on the issue he’s most passionate about – people with disabilities.

“What is the biggest issue in Campbelltown? I am happy to say disability, which is my soft spot,’’ says Gilholme.

“We have an area that’s growing and an area with a lot of people with disabilities as well.

“And I want them to be able to access Campbelltown.’’

There is a very good reason this young man, Campbelltown born and bred, is passionate about helping people with disabilities gain the same access to local services and facilities as everyone else: both his parents have disabilities.

“I also work here in Campbelltown as a disability support worker and transition to work adviser,’’ he explains.

“I help my clients access employment as well as figure out what the barriers are for them so they can overcome them – so it’s about giving them independence as well.

“I’ve already made a stepping stone working with my council colleagues with the project to make the libraries more accessible to kids on the autism spectrum, and I am open to pushing it a little further than that.

“We talk together on those sort of issues, and this is what I’d like to do, work with not just my Labor colleagues but the other councillors as well – there’s a lot of knowledge in that chamber and rather than using it against Campbelltown we’d use it for Campbelltown,’’ Gilholme said.

Gilholme was on the Labor ticket that saw the party win seven seats on the council last September.

He was in eighth spot and was very close to joining the other seven on the council, but in the end the 15th and last spot went to businessman Warren Morrison, of the Totally Locally Committed group founded by the late Fred Borg.

It was the death of Councillor Borg in December that created the vacancy on the council which will be filled by the winner of this Saturday’s contest.

The Labor Party, which got almost 50 per cent of the vote last September, is favoured to win, but Gilholme  isn’t taking anything for granted.

“There’s three candidates, so it could go either way,’’ he says.

“I’ve been hitting those train stations and those shopping centres, letting them know the date of the election, and who I am.

“Footpaths is a big talking point when I am out and about, and everyone with a disability needs to use flat footpaths, and I’d want to make sure they have those facilities available to them.’’

Ben Gilholme, who was born in Macquarie Fields, says his interest in politics started when he was bout 14.

“My grandmother, who was my biggest support, she passed away last year, she was the one who gave me the ability to look at both sides of the story, to be able to decide for myself,’’ he says.

“So when I was getting more active, and more interested in what to do in my community, I was able to go out and have a look at the parties myself and actually determine whether they met my values and what I believed in.’’

And that’s how he ended up in the Labor Party, which means that in just a few days we may have to address him as Councillor Ben Gilholme.

He says that if elected he will work together with everyone else on council to find solutions to problems such as road congestion.

“That’s a matter of working together, I mean that’s what I am hoping to do, work with everyone,’’ he says.

“I am running because I want to help people.’’ 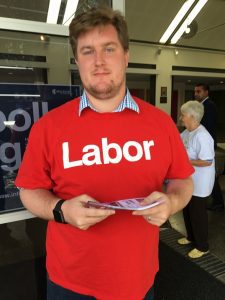