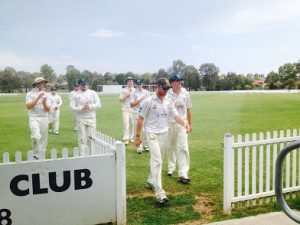 Scott Coyte was one of the Ghosts’ best in their win over University of NSW on Saturday.

The Camden Campbelltown Ghosts have rocketed up the ladder after a tremendous win over University of NSW on Saturday.

Firmly back in contention for this year’s Belvidere Cup, the Ghosts are now placed fifth, just one point behind Eastern Suburbs.

Coach Graeme Smith described the performance in the field as a “good, tough Sydney first grade win in which the boys’ showed great discipline”.

Captain Josh Clarke declared the Ghosts innings closed on the overnight total of 9-300 and soon had UNSW on the back foot before a rain interruption occurred at the Village Green Oval.

Prior to the rain Tom Rogers had begun his outstanding day with the ball by removing both opening bats.

After the delay Rogers continued to bowl quick, wrecking the student’s top order before returning to clean up the tail.

Rogers finished with 5-72 off 21 superb overs in difficult conditions.

Smith enjoyed what he witnessed and went out of his way to compliment the team on the way they stuck at it.

“The boys bowling into the wind did extremely well. Scott Coyte had a great spell in which he contained them whilst Tom Rogers roared downwind and bumped them. It was a solid bowling effort with great spirit in the team.”

The Ghosts third and fifth grades completed the clean sweep of the University club.

Also playing away, the Ghosts thirds took the points by 22 runs after dismissing UNSW for 242.

Faisal Nasim collected his 19th wicket for the season on his way to taking 4-47. Faisal was well supported by Wallace Marshall and Jarrod Collis, who took two wickets each.

The Ghosts fifth grade completely destroyed UNSW taking 20 wickets to add outright points to their commanding lead of the premiership.

They lead second place by 14 points and are almost double the points of the other sides that make up the top six.

Strong has 25 wickets for the season and would be confident of leading his side into the final series.

Second and fourth grade matches scheduled for Raby were abandoned due to consecutive weekends of rain. Campbelltown has experienced one of its wettest cricket seasons since 1978 and already January 2016, with 162.2mm to date, has doubled the long-term January average of 80.1mm.

• Next weekend the Campbelltown Camden DCC will host Penrith CC at Raby. First grade will be a Saturday/Sunday affair with all other grades playing one day matches. The first grade match promises to be a great clash with Penrith positioned third in the competition.

♦ In the Poidevin Gray Shield quarter final against Sutherland at Glenn McGrath Oval the Ghosts lost the toss and managed to contain the minor premiers to 7-247 runs. Josh Dunning, Luke Courtney, Mitch McGrath and Jordan Browne shared the Sutherland wickets.

The afternoon session saw the Ghosts struggle against a quality spin attack. Damien Mortimer and Tylar Edwards shared a 75 run partnership in the Ghosts reply of 172 runs. Mortimer finished with 71 runs with Edwards contributing 30.