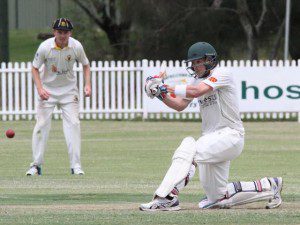 The Ghosts top order batsmen failed to fire on the weekend, with first drop Ryan Gibson managing just 15 before being caught behind. The Ghosts travel to Penrith to take on the home side this weekend in the first week of the Belvidere Cup finals series.

Maybe they had their minds on the semi finals, but whatever the reason the Ghosts just couldn’t fire with the bat or the ball in the final round of the Belvidere Cup.

However despite losing to Northern Districts on Saturday, the Ghosts finished the season in fifth spot and will now take on Penrith – who finished second – in the qualifying finals.

The finals series is played over three weeks, with the grand final being over three days.

But the Ghosts will have to improve from Saturday’s performance if they want to give the 2015-16 Belvidere Cup finals a shake.

It didn’t help when on arrival at Mark Taylor Oval the Ghosts strike bowler Scott Coyte took ill and was not able to take the new ball.

Nonetheless the Ghosts bowlers did take early wickets, having the home team precariously placed at 3/68.

A fourth wicket partnership took the score to 202 and eventually the home side amassed 262, not a bad total for a limited overs match.

The Ghosts run chase never looked like succeeding because it did not develop any momentum.

The regular loss of wickets put paid to that and despite some flourishes down the batting order – Ash Paddison with 45 and Jordan Browne with 34 – the Ghosts limped to a meagre total of 153, more than 100 runs shy of the target.

The semi final against Penrith will be played over this Saturday and Sunday.

If Ryan Gibson and the other top order batsmen fire, the Ghosts will have a good chance to progress to week two of the finals.

Another Ghosts side which will be playing finals cricket is fifth grade, who finished the competition in first place after beating Northern Districts by 28 runs on the weekend.

Ghosts put together 207 – thanks to Cameron Binskin’s 62 and Nathan Baker’s 31 – before dismissing Districts for 179.

Fifth grade will now host Sutherland this Saturday and Sunday at Raby in the semi finals.

From books to free WiFi, our library has it all
Macarthur Rams celebrate new surface with thumping 4-1 win