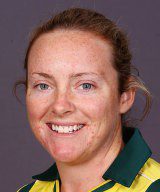 Sarah Coyte leads the rep pack at the Ghosts

Topping the list is star Sarah Coyte, who has been named in the Australian Southern Stars team to take on Pakistan and the West Indies.

Damien Mortimer has been selected in the Australian Chairman’s XI, which will play against South Africa.

Claire Koski is in the Australian Women’s Indoor cricket team which will take part in the World Cup in New Zealand.

Abdul Hammeed Kherkhah will be a key member of Sydney Thunder in the Big Bash Series, while the top scorer in first grade this season, number three Ghosts batsman Ryan Gibson won selection in the NSW Futures League and NSW second XI teams.

“The list is quite lengthy and one that we are very proud of. It seems to grow nearly every week as the elite squads for Cricket NSW are settled heading into National Championships.

“The success of our coaching staff should also be recognised for their hard work with the players.’’

More than 40 years experience in the news media, most of them as editor of local newspapers across the Sydney metro area, but a few years working as a sub-editor with the metros. Lots of awards, both as a reporter and editor, but says he values just as much Community Service Awards from Campbelltown City Council in 2004 and 2016. Took a voluntary redundancy in 2014 from Fairfax Community Newspapers after 21 years there. Loves the digital world, because ''there's no question it's the future''. Eric promises his hard hitting but fair approach won't change when he reports the news via cyber space.
View all posts by Eric Kontos
Recycling gets a $2.6 million boost
Pirates blasted off the park in 2014 decider