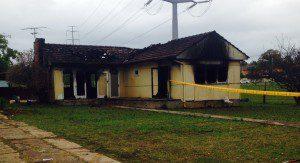 Police from Macquarie Fields Local Area Command have confirmed that nobody was inside when a fire gutted  a home in Cumberland Road, Ingleburn overnight.

About 9.10pm last night (September 12) emergency services were called to a home on Cumberland Road, after reports of a fire.

Officers arrived on scene to find the home well alight. NSW Fire & Rescue extinguished the blaze which has destroyed the home.

A crime scene was established and had not been removed when the South West Voice attended to take pictures of the house this morning. Two police officers were still stationed there.

Specialist forensic teams will go through the home later today and attempt to determine the cause of the fire.

Investigators are treating the fire as suspicious and would like to speak to anyone who may have information that can assist with their inquiries.

* IN OTHER news, police are appealing for witnesses after a man was threatened and robbed at knifepoint in Fairfield last night.

About 8pm a 44-year-old man was driving a green Mazda 323 on Fairfield Street, when he stopped at traffic lights on the intersection of The Horsley Drive. Two men entered his car and threatened him with a knife demanding cash.

The 44-year-old complied and handed over cash, the men got out of the car and ran away towards Cockburn Crescent, Fairfield. The driver then contacted police and Fairfield Local Area Command commenced an investigation.

Investigators would like to speak to two men who may be able to assist with inquiries or anyone who witnessed or has information surrounding the incident. One man was described as having a dark complexion, aged mid to late 20’s, slim build and was wearing a blue beanie with long tassels. The other man was only described as wearing a long sleeved top.