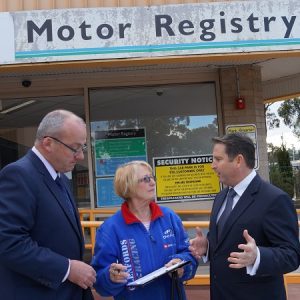 Service hours cut: NSW opposition leader Luke Foley with MP Greg Warren and an unhappy member of the public outside the closed down motor registry at Campbelltown.

The outrage started when three local motor registries, at Ingleburn, Narellan and Campbelltown, were closed down by the State Government just over a year ago.

The anger in the region continued when the Service NSW centre at Gregory Hills that replaced the motor registries did not include public toilet facilities.

The other thorny issue was that it was not easily accessible via public transport.

And now the State Government has ensured the local community will continue to be unhappy by cutting the operating hours of Macarthur Service Centre at Gregory Hills.

Previously open from 7am to 7pm weekdays, the Macarthur Service Centre at Gregory Hills will now open an hour later and closer an hour earlier each day.

Not surprisingly, the Member for Campbelltown, Greg Warren, has slammed the Baird Government’s decision to cut back the operating hours of Service NSW centres across the state, including the local one at Gregory Hills.

“These changes to the opening hours of the Service NSW centre at Gregory Hills effectively make it impossible for local residents to access the Macarthur Service Centre before or after work on weekdays,’’ Mr Warren said.

“People working in the city can forget about it, but even for those residents who are fortunate enough to work locally here in Campbelltown, if they left Campbelltown at 5pm on the dot they would struggle to make it through Narellan Road to get to Gregory Hills by 6pm.

“Mike Baird and his Government should be doing everything they can to make it easier for local residents to access vital Government services.

“Instead, we’ve seen them close our motor registry, move it out to Gregory Hills and now slash the opening hours,” the local MP said.

More than 40 years experience in the news media, most of them as editor of local newspapers across the Sydney metro area, but a few years working as a sub-editor with the metros. Lots of awards, both as a reporter and editor, but says he values just as much Community Service Awards from Campbelltown City Council in 2004 and 2016. Took a voluntary redundancy in 2014 from Fairfax Community Newspapers after 21 years there. Loves the digital world, because ''there's no question it's the future''. Eric promises his hard hitting but fair approach won't change when he reports the news via cyber space.
View all posts by Eric Kontos
Feel the Magic joins Wests Tigers team for next season
Pink portraits: breast cancer survivors get in the frame to help others