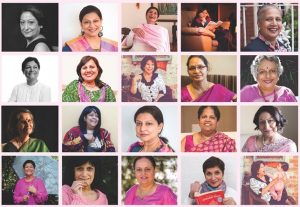 “My mother died of breast cancer at 58 years of age,’’ says Behroze Bilmoria.

“My grandmother and her two sisters also died of breast cancer.

Behroze Bilmoria is one of 14 breast cancer survivors from Indian and Sri Lankan backgrounds living in NSW who agreed to be photographed in order to encourage other women in the community to have a mammogram.

The photos are part of an exhibition – Portraits in Pink – aimed at breaking a culture of silence on breast cancer in the Indian and Sri Lankan communities, which have some of the lowest screening rates for breast cancer in NSW.

“Regular mammograms are absolutely essential for all women over 50,’’ says Behroze Bilmoria.

“My two daughters have a mammogram and ultrasound every year.

“There is no shame and very little pain – but it saves your life.

“Today I am healthy, happy, 75 years old and the biggest joy in my life is that I am a grandmother – which was what I wanted to live for.”

The exhibition, an initiative of the Pink Sari Project, will open on Tuesday, October 4 in the HJ Daley Library at Campbelltown.

The Pink Sari Project is a community initiative that aims to increase awareness of low participation rates in the BreastScreen NSW program among Indian and Sri Lankan women in NSW and encourage them to screen regularly.

“These women have shown tremendous courage in sharing their stories and should be proud of these beautiful portraits which serve the important purpose of initiating conversation about breast screening amongst Indian and Sri Lankan communities in NSW,” says Sarah McGill, director of screening and prevention at the Cancer Institute NSW.

“Having a regular breast screen is key to early detection and treatment of breast cancer,’’ Ms McGill said.

WHAT: Portraits in Pink – exhibition of breast cancer survivors from Indian and Sri Lankan backgrounds in NSW;

More than 40 years experience in the news media, most of them as editor of local newspapers across the Sydney metro area, but a few years working as a sub-editor with the metros. Lots of awards, both as a reporter and editor, but says he values just as much Community Service Awards from Campbelltown City Council in 2004 and 2016. Took a voluntary redundancy in 2014 from Fairfax Community Newspapers after 21 years there. Loves the digital world, because ''there's no question it's the future''. Eric promises his hard hitting but fair approach won't change when he reports the news via cyber space.
View all posts by Eric Kontos
Even less service now: Macarthur centre reduces opening hours
Hannan is Wollondilly mayor, Camden and Campbelltown vote tonight