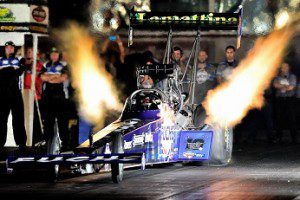 The 2014 ANDRA Drag Racing Series Top Fuel Championship has been a slugfest between two premier teams and two of the most popular drivers on the circuit.

Allan Dobson and Phil Lamattina have swapped race wins and Championship leads throughout the year but it all comes to a head this weekend, October 31 – November 2 at Sydney Dragway in the Grand Final Australian Nationals.

“This year has occupied a fair bit of my thought process and I have been thinking about him (Dobson) a fair bit actually,” said Lamattina.

“I wouldn’t say I’m nervous because at the end of the day I know how to drive the car. I didn’t unlearn that all of a sudden.

“It’s a see-saw battle. We came out strong, looked like we were going okay. Then we sort of dropped the ball and all of a sudden Dobbo won three in a row, he’s starting to look strong then we come back and wrestled the lead off him.

“It’s been a good wrestle right from the start all year. It just hasn’t been a dominant performance by anybody, which is great for the punters.

“John Zappia and Mark Drew, these guys have all wrapped up their Championships and here is poor old Dobbo and Phil Lamattina having a bit of a punch up at the Nationals, it’s exciting.”

The rumour around the pits at the Fuchs Spring Nationals was this weekend could be Dobson’s swansong.

But even with Top Alcohol racer Wayne Newby testing for the Rapisarda team this past weekend, Dobbo isn’t quite ready to let go entirely just yet.

“No not yet, I’m not going to retire just yet,” he said. “I was thinking of it but not just yet. I’ll keep driving, I’ll keep developing.

“Santo (Rapisarda) is going to run a three-car team next year and I might just end up doing meetings where they run the third car.

“But I said to Santo I’d like to keep racing a little bit and he said; ‘Well how about you just go in the third car?’ And then I can mainly go race all the big ones.”

With retirement rumours put to bed, Dobson is focussing solely on making up the 33-point deficit to win his first ever Australian Championship.

Dobson added; “It’s a very healthy rivalry (with Lamattina) there’s no doubt about that. But it’s also a very serious rivalry going on.

“We obviously both want it equally as much though maybe since his team has already got one I want it a little bit more.

“Phil has already won a Championship and after seven years of racing for Santo Rapisarda I’d love to hand a Championship to him, his family and the race team after all that support.

“But also I’d love to have the honour and respect of winning the Championship for my own family who have been supporting me all these years.

“Jenny my wife, Renee and Kye have been backing me all those years. So that gives me the attitude to put everything into it 110 per cent.”

Qualifying for the Aerolfow Sportsman Drag Racing Championship gets under way this morning (Friday) from 9am with eliminations to commence from 10am tomorrow and continue through Sunday from 9:45am.

More than 40 years experience in the news media, most of them as editor of local newspapers across the Sydney metro area, but a few years working as a sub-editor with the metros. Lots of awards, both as a reporter and editor, but says he values just as much Community Service Awards from Campbelltown City Council in 2004 and 2016. Took a voluntary redundancy in 2014 from Fairfax Community Newspapers after 21 years there. Loves the digital world, because ''there's no question it's the future''. Eric promises his hard hitting but fair approach won't change when he reports the news via cyber space.
View all posts by Eric Kontos
Third lane opened: M5 travel times reduced
Victor Chang institute awards for 10 local science students