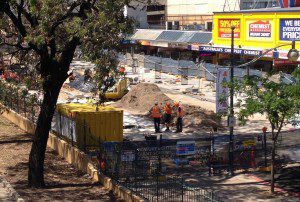 Council takes over project: The Macquarie Mall makeover project has been beset by delays.

Liverpool City Council CEO Carl Wulff has announced this afternoon that the agreement with Hargraves Urban to rebuild Macquarie Mall will cease.

He said council will take over the project in the short term.

“We felt that the best way forward for the people of Liverpool was for the council to take over the rebuilding of Macquarie Mall,” Mr Wulff said.

The South West Voice reported a month ago that the multi million dollar Macquarie Mall makeover project had been hit by delays of up to four weeks.

Mr Wulff has been personally checking the progress – or lack of it – over the past few weeks and a decision was made to change course.

The project, which could cost around $10 million, included ripping up existing pavers between Moore Street and Elizabeth Street and replacing them with some of the most expensive pavers available on the market.

As a result of the revamp, the Remembrance Day memorial has been taken down and will be eventually erected in a new location.

And the fountain near the children’s play area also got the axe in the redesign.

But council’s main concern is that the inconvenience suffered by shopkeepers who operate out of Macquarie Mall is kept as short as possible.

It is believed Mr Wulff is confident council can get the project schedule back on track.

No official reason was given for the termination of the agreement with Hargraves Urban, who were the successful tenderer for the job in 2015.

More than 40 years experience in the news media, most of them as editor of local newspapers across the Sydney metro area, but a few years working as a sub-editor with the metros. Lots of awards, both as a reporter and editor, but says he values just as much Community Service Awards from Campbelltown City Council in 2004 and 2016. Took a voluntary redundancy in 2014 from Fairfax Community Newspapers after 21 years there. Loves the digital world, because ''there's no question it's the future''. Eric promises his hard hitting but fair approach won't change when he reports the news via cyber space.
View all posts by Eric Kontos
Upgrade of Heathcote Road hits concept design stage
Two men charged with historical sexual assaults in Liverpool Catholic school