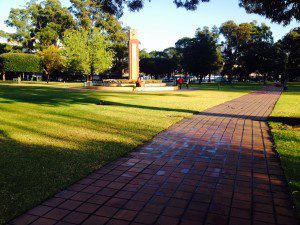 THEY didn’t have the numbers to force the issue, but Liverpool Council’s Labor Party representatives last night landed some telling blows over plans to reopen the Macquarie Mall to traffic after business hours.

Former mayor Wendy Waller raised concerns about the cost of the project, as well as the consultancy fees proposed for Professor Ed Blakely, of the US Studies Centre.

A report to council for its September meeting held last night (September 24) recommended that Mr Blakely, who is listed in the Building Our New City Committee minutes as “Honorary Advisor to the Mayor’’ be paid $65,000.

Councillor Waller also highlighted the cost of the overall project, $1 million, which would pay for the Macquarie Mall and work on Bigge Park and the Newbridge Road gateway project.

“What we’d like to know is how spending $1 million on these projects will impact on other services or projects in Liverpool,’’ Cr Waller said.

The mayor, Ned Mannoun, defended both the plans for the Mall, Bigge Park and the gateway, as well as the consultancy fees to be paid to Mr Blakely, who does around two days work a week for Liverpool Council.

“I have just hosted management from a blue chip company who are looking to relocate their operations, including around 5,000 jobs, and what they wanted to know from Liverpool was: if we come here, where will our staff go after hours, what facilities do you have, that sort of thing,’’ Cr Mannoun said.

“If we don’t go ahead with these projects we won’t have a chance to be on the short list for these sort of businesses which will bring a lot of jobs to Liverpool,’’ he said.

“Mr Blakely is an expert in this field and that’s why we want to continue using his services,’’ Cr Mannoun told council.

Councillor Tony Hadchiti also defended paying for the services of Mr Blakely: “someone of his stature, to be telling very important people, have you had a look at Liverpool lately, well, that’s very important.

“I was at a meeting recently, 80 very important people, CEOs, CFOs of major organisations and Mr Blakely did just that, told them about Liverpool becoming a business destination,’’ Cr Hadchiti said.

Councillor Sabrina Mamone said there was a buzz in Liverpool about the plans to build a better city.

“We have been planning this for a while and it’s about keeping what we have and adding to it,’’ Cr Mamone said.

A Labor Party motion to discuss the matter in confidential mode was defeated, and a majority of councilors voted to approve the recommendations contained in the report.

It means that the implementation stage has been reached with the availability of the $1 million and the use of Mr Blakely as an advisor as work progresses in the Macquarie Mall, Bigge Park and the gateway project.

According to the plans, the fountain in the Mall will be ripped out, the street will be redesigned to allow for one way traffic at night, new paving, maintaining and improving the children’s play area and installing new lighting, street furniture and an outdoor TV screen for big sport events.

Plans for Bigge Park include the removal of the music shell, a pop up café and improved pathways.

The gateway project includes landscaping, lighting on the bridge at Newbridge Road and new branding placement. 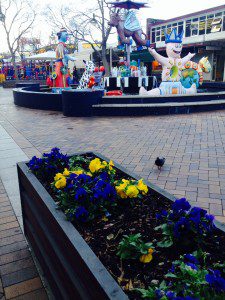 Macquarie Mall will soon have cars driving through it after dark

Facebook: friend or foe
Everyone loves a parade, and Fisher’s Ghost is one of the best