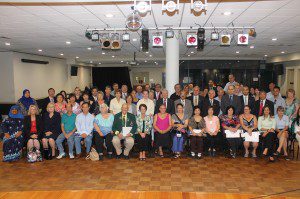 MP Chris Hayes has  presented community service awards in recognition of the contribution of some of the most hardworking and dedicated members of the Fairfield and Liverpool communities.

More than 80 worthy recipients were nominated by a number of local organisations for their effort in helping the community in various capacities.

In his opening address, the federal member for Fowler used the opportunity to outline the importance of our community sticking together in light of the tragic incident that occurred in Martin Place the previous night.

“In this very difficult time it is more important than ever that we come together, support each other and acknowledge our shared values, among which are the belief in peace and unity.

“This is especially important in a multicultural area such as ours.

“Today we recognise some of the most outstanding members of our community who serve as an example to the rest of us of with their selflessness and dedication to helping others”, Mr Hayes said.

More than 40 years experience in the news media, most of them as editor of local newspapers across the Sydney metro area, but a few years working as a sub-editor with the metros. Lots of awards, both as a reporter and editor, but says he values just as much Community Service Awards from Campbelltown City Council in 2004 and 2016. Took a voluntary redundancy in 2014 from Fairfax Community Newspapers after 21 years there. Loves the digital world, because ''there's no question it's the future''. Eric promises his hard hitting but fair approach won't change when he reports the news via cyber space.
View all posts by Eric Kontos
Man charged after alleged metal bar attack
Wanderers, NRMA to team up for another three years