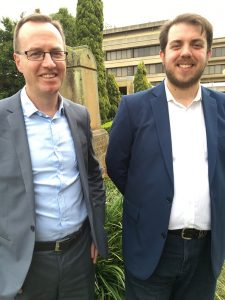 The Greens say Campbelltown contains some of the most important bushland in NSW, including a range of endangered ecological communities, but this natural treasure trove is under attack from the surge of development being forced on the region.

“One of the key reasons people choose to live in Campbelltown is the extent of green open space and the close proximity to unique natural reserves and this is all threatened by the scale of development proposed for the region in the next few years,’’ says David Shoebridge, a Greens MP in the NSW Parliament and the party’s planning and local government spokesperson.

Mr Shoebridge was in Campbelltown today to launch the party’s local government planning policy ahead of the council elections on Saturday, September 10.

He was joined by Ben Moroney, who heads the Greens’ ticket for Campbelltown Council.

Standing in front of the Campbelltown Council civic centre, the Greens pair said that Campbelltown Council “needs to stand up and demand a better deal from the state government including the right to charge private developers the real cost of providing high quality community services for new developments.

“Campbeltown is facing some serious challenging planning issues mostly as a result of very shortsighted state planning decisions that don’t seem to care about the long term liveability of South West Sydney.

“The low amount that developers have to pay councils to build community assets means there are large housing subdivisions approved without essential community facilities being built to support local communities.

“This means developments with too little green open space, too few community halls, no libraries and local roads that are literally clogged with traffic.’’

Ben Moroney said the recent redevelopment of Airds and Bradbury had come at a huge cost to the local environment.

“It meant the loss of substantial amounts of local bush and Aboriginal sacred sites, as well as over 800 units of public housing,” he said.

“We are now seeing the Greater Macarthur Land Release looming, with potentially massive destruction of natural and built heritage in Mt Gilead.

“We want to ensure these land releases and future developments are held to the strictest standards of community consultation, provision of services and social equity, and environmental sustainability,” Mr Moroney said.

Man charged with attempted murder after machete attack at Raby
Awards for passion, drive and innovation

One Response to Campbelltown’s natural treasure trove under attack: Greens