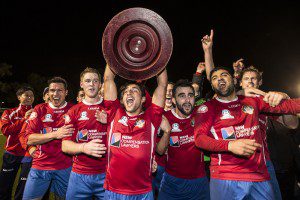 Bonnyrigg White Eagles have won the IGA NPL NSW Mens 1 premiership in dramatic circumstances on the weekend after a 1-nil injury time win against Sydney Olympic.

The victory stole the premiership off the Blacktown Spartans after their horrifying 7-0 loss to Blacktown City earlier in the day.

In a contest that will go down into the competition’s history books, Robbie Younis broke the deadlock with only a minute remaining.

The open match included exactly what every football match should have, with end to end action from the first whistle keeping coaches, players, fans and officials all on their end of their seats.

Sydney Olympic settled into the match early troubling the Bonnyrigg defence from the outset earning a corner in the 3rd minute.

The Japanese midfielder was at it again in the 16th minute beating two Bonnyrigg defenders on the left before cutting back to a free Christos Tomaras who could not control his shot.

Bonnyrigg sharpshooter Robbie Younis took it upon himself to try and spark his side into action with a cracking free kick on 17 minutes with Sydney Olympic goalkeeper Paul Henderson pulling off a fantastic diving save to deny him.

Olympic opened up the Bonnyrigg defence again in the 26th minute when they countered form inside their half. Go Shirai attacked and cut back to Michael Gaitatzis whose shot was skied over the bar.

Alex Mansueto was next to attack for Bonnyrigg, beating Troy Danaskos before his powerful drive was saved on the second attempt.

Bonnyrigg’s task got a little more difficult in the 32nd minute when Matthew Nash was forced form the field with an injury and replaced by Tristan Pendergast.

The loss did not deter Bonnyrigg with Aaron Peterson’s half volley bending away from goal four minutes later.

The attacker was on the end of a Terry McFlynn ball on 39 minutes with his shot just flying past the top right hand corner.

Bonnyrigg came out from the half time break at great speed with Chris Tadrosse twice fidning space on the left within the first two minutes.

Alex Canak was furious after his penalty shout was turned dwon in the 50th minute with referee Ryan Shepheard making a good call. 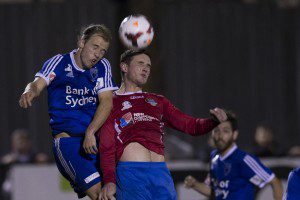 Two minutes later Sydney Olympic were on the attack through another counter. This time Brayden Sorge powered onto the bal before passing to Tomaras whose shot deflected into Hatzimouratis’ path. The striker’s impending attempt was well saved by Prendergast.

Sorge threatened again in the 58th minute with a fantastic cross finding a free Hatzimouratis. The former A-League striker’s header could only find the safe hands of Prendergast.

Hatzimouratis had another two chances within five minutes and again couldn’t break the deadlock. Firstly William Angel picked him out in the 68th minute with the striker cutting the ball back onto his left foot and striking the ball just wide of the right hand upright.

Five minutes later he was put through on goal again with Prendergast again coming up trumps.

As the game wore on Bonnyrigg stepped it up and retained possession of the ball but could not break a stubborn Olympic defence until the second minute of injury time.

After Bonnyrigg played a long ball in hope Yianni Spyrakis mistimed the ball and missed a header giving the ball right to Robbie Younis. The in-form striker turned the ball onto his right foot and stepped past two defenders before striking the ball into the bottom right hand corner sending the Bonnyrigg bench and fans into raptures and handing his side the IGA NPL NSW Mens 1 Premiership.

More than 40 years experience in the news media, most of them as editor of local newspapers across the Sydney metro area, but a few years working as a sub-editor with the metros. Lots of awards, both as a reporter and editor, but says he values just as much Community Service Awards from Campbelltown City Council in 2004 and 2016. Took a voluntary redundancy in 2014 from Fairfax Community Newspapers after 21 years there. Loves the digital world, because ''there's no question it's the future''. Eric promises his hard hitting but fair approach won't change when he reports the news via cyber space.
View all posts by Eric Kontos
Our councils get federal cash injection
Baseball bat bandits take off empty handed