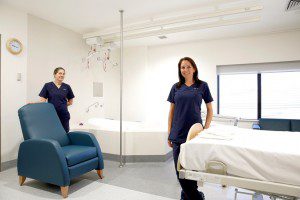 Midwives Louisa Ainscough (left) and Andrea Macinnis in one of the new rooms of the birthing centre.

A new birthing centre boasting three newly built and one newly refurbished birthing suites has been opened at Campbelltown Hospital, as part of the its $134 million redevelopment.

The birthing centre is located in the Birthing Unit, along with the hospital’s existing delivery suites, bringing the total number of beds to 11.

The new rooms offer a less clinical environment for women with low risk pregnancies who do not require an extended hospital stay.

Two of the rooms also include a large pain relief birthing bath that is used to support more natural methods of pain relief prior to birth.

An additional two assessment beds have also been added to the Birthing Unit, bringing the total number to four.

Assessment beds are used to monitor a baby’s heart rate before it is born, monitor a woman’s contractions or to determine whether a mother is in labour.

“The rooms are for women who have had uncomplicated pregnancies and want to have their baby in a more natural, home-like environment,” Ms Bester said.

“Women in the Birthing Centre are cared for by midwives from both the Midwifery Group Practice and the Hospital’s Maternity Unit,” she said.

In the 2013/14 financial year, Campbelltown Hospital delivered more than 2,930 babies.

For more information about the Campbelltown Hospital redevelopment visit:

More than 40 years experience in the news media, most of them as editor of local newspapers across the Sydney metro area, but a few years working as a sub-editor with the metros. Lots of awards, both as a reporter and editor, but says he values just as much Community Service Awards from Campbelltown City Council in 2004 and 2016. Took a voluntary redundancy in 2014 from Fairfax Community Newspapers after 21 years there. Loves the digital world, because ''there's no question it's the future''. Eric promises his hard hitting but fair approach won't change when he reports the news via cyber space.
View all posts by Eric Kontos
Will it be fourth time lucky for the Pirates?
Campbelltown hits council amalgamation for six