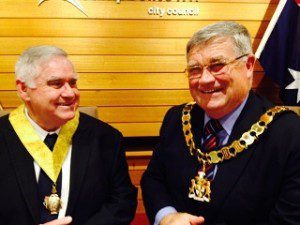 One year ago: Mayor Paul Lake, right, on the night he was elected mayor of Campbelltown in 2014, and his deputy, Cr Ted Rowell.

Campbelltown is the engine room of the south west, says Mayor Paul Lake, just 24 hours before his year long tenure comes to an end.

“With the proposed business parks in various stages of planning, the start of works on the Clinical School, and the continuing success of the School of Medicine, Campbelltown is well placed to become the integrated health hub of the university’s innovation corridor and a city of choice for businesses and employers,’’ Cr Lake said in his final media statement.

The council will meet tomorrow night, Tuesday, September 22, to elect a new mayor.

Barring last minute mishaps, the Liberal Party’s Paul Hawker will get to wear the mayoral chains for the next 12 months, while Cr Alana Matheson is expected to get the nod as his deputy.

Cr Matheson, the daughter of federal member for Macarthur, Russell Matheson, will not run for office at next September’s local government elections.

Labor is expected to put up Councillor George Brticevic as its candidate for mayor, but it is certain Cr Hawker has the numbers to win the ballot – assuming all councillors attend the meeting. 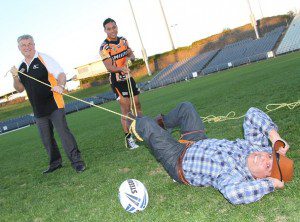 Cr Lake told the South West Voice that while he was positive about the future of Campbelltown and the region, he’d wished he had a two year term to be able to steer some projects to completion.

Describing his role as “chief salesman’’ for the town, he said: “If I could wish for something it would be great if I had another 12 months, to work with the new GM (Lindy Deitz) to see things through.’’

But he wished the new mayor well – “whoever it is’’.

“I would like to take this opportunity to wish the next Mayor all the best,’’ he said.

“I hope they continue on with the job with the same passion, enthusiasm and drive to take the city forward as I have.’’

Cr Lake said it had been an “absolute pleasure’’ to be Campbelltown mayor during the past year.

“With so many positive things happening both in and around the city, it’s been an honour for me to play a role in helping shape the future direction of our great city,’’ he said.

“With the Macarthur region anticipated to grow to more than 500,000 people in the next 15 to 20 years, and as one of only three Regional City Centres outside the Sydney and Parramatta CBDs, there is a major focus in Campbelltown on expanding employment opportunities, services and transport connections for the city into the future.

“We’ve been working very closely with the Department of Planning on the Glenfield to Macarthur Urban Renewal Corridor, which will revitalise our seven train station precincts, creating more vibrant and active public spaces for the community. 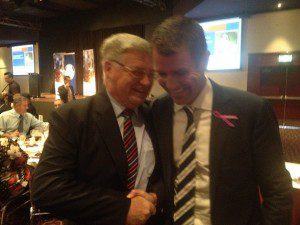 “The strategy is very exciting, and I’m looking forward to seeing the outcome of the public exhibition.’’

A recently announced makeover of Queen Street was just the beginning, according to Cr Lake.

“I want the main street to be a destination in its own right, but we need to work together – council, local business owners, the community, developers – to create an area that we are all proud of, a public space that thrives and that truly reflects the diversity of Campbelltown,’’ he said.

“This revitalisation extends beyond the main street, however.

“We want more local jobs for local people, so we have turned our attention to actively searching for more investment and development opportunities which will create those jobs.

“The extension of Macarthur Square shopping centre is a prime example of those jobs – the redevelopment is expected to generate more than 2,000 jobs during construction and about 1,000 additional retail positions once it’s complete.

“For me, it’s about attracting people to come to Campbelltown to live, work, play and invest.

We want to work with you to create a city whose residents don’t need to travel elsewhere for jobs, services or facilities.’’

Mr Lake said that he plans to run for a further four year term next year.

“At this stage I have decided to run and only three things would stop me from running: waning enthusiasm and drive, the state of my health and the needs of my family.’’

More than 40 years experience in the news media, most of them as editor of local newspapers across the Sydney metro area, but a few years working as a sub-editor with the metros. Lots of awards, both as a reporter and editor, but says he values just as much Community Service Awards from Campbelltown City Council in 2004 and 2016. Took a voluntary redundancy in 2014 from Fairfax Community Newspapers after 21 years there. Loves the digital world, because ''there's no question it's the future''. Eric promises his hard hitting but fair approach won't change when he reports the news via cyber space.
View all posts by Eric Kontos
Some humble advice for Malcolm Turnbull
Hoop into Liptember to help tackle women’s mental health issues

One Response to Bigger, better Campbelltown on the way, wish I had another year: Mayor Paul Lake