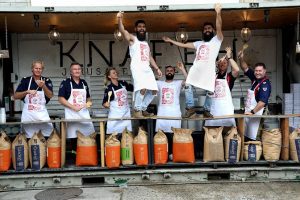 Heading to the Campbelltown Arts Centre with a serious message: The boys from the Knafeh Bakery in action with members of Fire & Rescue NSW.

When you want to send out a “keep looking when cooking’’ message, who you gonna call?

The message belongs to Fire & Rescue NSW and they have joined forces with the bearded bakers from Knafeh Bakery.

The popular bakers will shake and bake their popular Middle-Eastern dessert at Campbelltown Arts Centre tonight (Thursday, May 25) and again this coming Sunday night.

The aim of the event is to educate the public about the importance of the “keep looking when cooking’’ message.

The Knafeh Bakery is a popular pop-up bakery, housed in an old shipping container, which travels to different locations across NSW.

This week, the boys from the bakery will be sharing their love for cooking with Fire & Rescue NSW to highlight the dangers of leaving cooking unattended.

The community will have the opportunity to meet with local firefighters, who will be conducting live cooking demonstrations in an effort to educate the public about what to do in the case of a kitchen fire.

Members of the community will also receive a specially-designed wooden spatula to serve as a constant reminder to “keep looking when cooking’’ .

Kitchen fires have the highest incidence rates in homes. On average, NSW firefighters respond to around 3,865 house fires a year.

There are on average 21 house fire fatalities each year and around 502 people injured.

Already this year five people have died as a result of an accidental fire in their home in NSW and FRNSW does not want to see this number increase.

Fire & Rescue NSW urges the public to call Triple Zero in case of a fire and once you get out, stay out.

WHAT FRNSW and Knafeh Bakery shake and bake their popular Middle-Eastern dessert to educate the public about the importance of FRNSW’s ‘Keep Looking When Cooking’ message;

More than 40 years experience in the news media, most of them as editor of local newspapers across the Sydney metro area, but a few years working as a sub-editor with the metros. Lots of awards, both as a reporter and editor, but says he values just as much Community Service Awards from Campbelltown City Council in 2004 and 2016. Took a voluntary redundancy in 2014 from Fairfax Community Newspapers after 21 years there. Loves the digital world, because ''there's no question it's the future''. Eric promises his hard hitting but fair approach won't change when he reports the news via cyber space.
View all posts by Eric Kontos
Macarthur Greens add community fundraising to their repertoire
The road ahead for motor accidents compensation in NSW