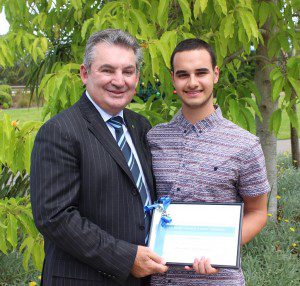 Adam Taiba has been named the 2014 Volunteer of the Year for Macarthur in a ceremony at Campbelltown Arts Centre today.

The Currans Hill resident has been instrumental in raising awareness amongst young people about the consequences of alcohol fuelled violence.

After his father was king hit in September 2013, Adam started a campaign to spread the message about the dangers, effects and consequences of alcohol to students across Macarthur.

Mr Matheson said Adam was a great asset to this community and should be very proud of this award.

“The way Adam has approached his campaign has been inspirational to all those who have seen him in action.’’

Mr Matheson said his office had received a record number of nominations for the awards – 71 in total.

“It’s fantastic to see so many of our hard-working volunteers recognised for the time, effort and dedication they put in to helping others and making Macarthur such a lovely place to live.

“Our volunteers are the heart and soul of this community, without them so many of our charity groups, businesses, sporting clubs and organisations wouldn’t survive.

“I’d like to congratulate everyone who was nominated for an award this year, especially those who have won their category.” 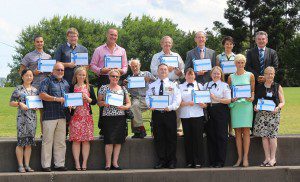 Mr Matheson with all of the 2014 winners

This year’s nominees came from all over Macarthur, representing thousands of volunteers who help out in our community each week.

And the winners were:

More than 40 years experience in the news media, most of them as editor of local newspapers across the Sydney metro area, but a few years working as a sub-editor with the metros. Lots of awards, both as a reporter and editor, but says he values just as much Community Service Awards from Campbelltown City Council in 2004 and 2016. Took a voluntary redundancy in 2014 from Fairfax Community Newspapers after 21 years there. Loves the digital world, because ''there's no question it's the future''. Eric promises his hard hitting but fair approach won't change when he reports the news via cyber space.
View all posts by Eric Kontos
How to avoid getting food poisoning at Christmas
Will it be fourth time lucky for the Pirates?