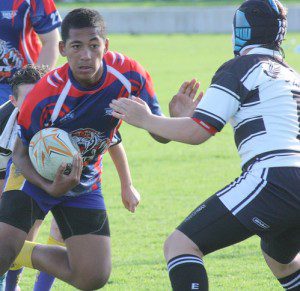 The 2015 South West Sydney Academy of Sport junior rugby league development trials were a huge success despite a drop in participation levels in the past couple of years.

“We had a huge crowd on hand on Monday to watch more than 200 talent identified young players trialling for the South West Sydney Academy of Sport under 14 and under 15 summer development squads,’’ Mr Knights said.

As part of the talent identification process, local clubs identified and named their top 10 players in each age group to attend the trials.

Following the trials the Academy inducted the top 30 players in each age group into its development program.

The final selections were made following video analysis of the evening’s five games by the selection panel.

Mr Knights said that while local junior participation numbers have been down over the past two years the support provided to the Academy by the NSW Rugby League and Wests Tigers in the area of junior development has continued to be “exceptional’’.

“And at the trials, the assistance of the home club the Minto Cobras, the selection panel, SWSAS staff and the five attending NRL development officers was outstanding,’’ he said.

“And although large in number, the trials went off without a hitch,’’ Mr Knights said.

He said he was also pleased to see the Wests Tigers newly appointed NRL football operations manager Tyrone Collins in attendance, and praised the club for its appointment of a man passionate for the area and the game.

“Hopefully we can find another local Jarryd Hayne or Israel Folau, who may take his first representative steps through programs such as the Academy’s summer development program, and move through local representative teams to the world stage.’’

♦ For information on Academy corporate sponsorship opportunities and programs, visit www.swsas.org.au or telephone 4627 7622.

More than 40 years experience in the news media, most of them as editor of local newspapers across the Sydney metro area, but a few years working as a sub-editor with the metros. Lots of awards, both as a reporter and editor, but says he values just as much Community Service Awards from Campbelltown City Council in 2004 and 2016. Took a voluntary redundancy in 2014 from Fairfax Community Newspapers after 21 years there. Loves the digital world, because ''there's no question it's the future''. Eric promises his hard hitting but fair approach won't change when he reports the news via cyber space.
View all posts by Eric Kontos
Petition for noise barriers: council flicks audit to state government
Six emerge victorious from East Coast Nationals