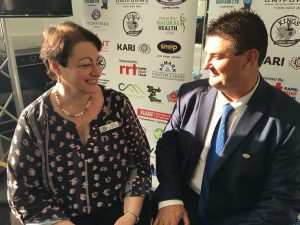 The 12 seater bus was donated to 24 Hour, which picked up the cost of a driver.

Local cancer patients are picked up, dropped off at either the Campbelltown or Camden Hospitals cancer therapy centres and then picked up again and taken home.

Today, the newly elected chairman of 24 Hour Macarthur, Warren Morrison, used the bus as an example of how money donated to the mighty local charity directly helps cancer patients.

Mr Morrison was speaking at the official launch of another year of fundraising for 24 Hour Macarthur.

Mr Morrison, who is also a Campbelltown councillor, was the deputy chairman to the late Fred Borg, the founder of 24 Hour Macarthur.

“We have to keep going forward, as Fred would have expected us to,’’ Mr Morrison told today’s launch.

“It’s a great honour to be elected chairman for 24 Hour Macarthur, following in Fred’s footsteps,’’ he said.

“I promise to give it 100 per cent, 150 percent, whatever it takes to make sure his legacy stays alive.’’

“This is a staggering achievement for a local, non profit organisation, run totally by volunteers,’’ he said.

“Every dollar raised is put towards helping the cancer patients of Campbelltown and Camden Hospitals, so that’s 100 percent by Macarthur for Macarthur.

“Our money pays for state of the art equipment and services to provide the best cancer treatment in the state.

“This is indeed a great achievement,’’ Mr Morrison said.

As part of the official launch earlier today at the Macarthur Lexus showroom in Gregory Hills, a video tribute to Fred Borg’s memory was played on two large screens. 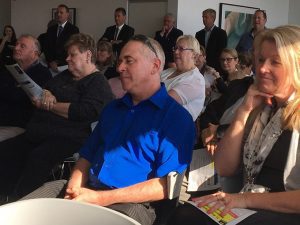 In attendance today for the 24 Hour Macarthur launch at the Lexus showroom in Gregory Hills were members of the Borg family, including Paul Borg and Donna Boniface.

More than 40 years experience in the news media, most of them as editor of local newspapers across the Sydney metro area, but a few years working as a sub-editor with the metros. Lots of awards, both as a reporter and editor, but says he values just as much Community Service Awards from Campbelltown City Council in 2004 and 2016. Took a voluntary redundancy in 2014 from Fairfax Community Newspapers after 21 years there. Loves the digital world, because ''there's no question it's the future''. Eric promises his hard hitting but fair approach won't change when he reports the news via cyber space.
View all posts by Eric Kontos
Bowel cancer: early diagnosis via screening kit best defence
Man, 60, assaulted, robbed in Koshigaya Park last night