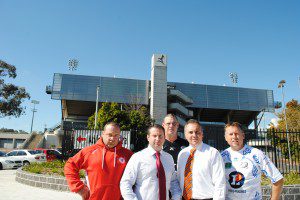 What about our local stadium: Greg Warren and Guy Zangari (front) with local sport fans.

The Campbelltown Stadium has become the centre of a war of words between the Labor Party candidate for the seat of Campbelltown and the man whose job he’s after, the Liberal Party’s Bryan Doyle.

Greg Warren, a Camden councillor who has won preselection for Campbelltown, enlisted the party’s shadow sport spokesman Guy Zangari this week to slam the State Government’s major stadiums strategy and its “negative’’ impact on the Campbelltown facility.

Zangari and Warren claimed the strategy was at the expense of local stadiums, except Brookvale Oval, which has received funding for an upgrade.

The facility is in Premier Mike Baird’s electorate and the pair have questioned why Mr Doyle has not stood up for Campbelltown.

But for his part, Mr Doyle has hit back, saying Mr Warren and Mr Zangari had not told the whole story. He said the $10 million funding for Brookvale Oval was from the Commonwealth Government, not the State Government.

“I would suggest that that the Labor candidate take a class in honesty,” Mr Doyle said.

“Campbelltown Stadium is a multi-purpose facility and will in fact be the base for China’s National football team for its 2015 AFC Asian Cup campaign.’’

Mr Warren said that Campbelltown Stadium was a fantastic community asset that had benefited from millions of dollars of investment from taxpayers and ratepayers – “now the Liberals want to lock it up and leave it to rot.

“Why are we being asked to abandon a stadium that is located strategically near public transport and is in a region that will see thousands of new residents moving in over coming years – it defies common sense,’’ Mr Warren said.

“The state’s Stadia Strategy should be about getting local community more engaged in sport – you don’t do that by making it harder for busy families to attend games and watch our kids run out onto the field.’’

Minister for Sport and Recreation, Stuart Ayres MP has thrown his support behind the Member for Campbelltown in this bunfight.

“These two muppets from Labor together know as much about Campbelltown as Bryan Doyle’s little finger. Campbelltown has had greater advocacy for sporting facilities from Mr Doyle than any Member of Parliament  in the last 15 years,” Mr Ayres said. 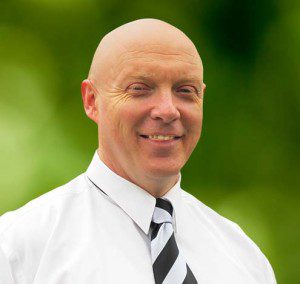 That’s not right: the state member for Campbelltown Bryan Doyle