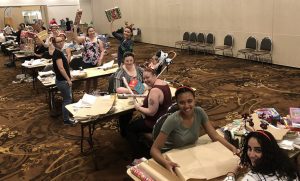 Hundreds of local children who are either in care, in crisis situations, are victims of domestic violence or their family is struggling financially, will find a special gift under the tree this Christmas.

The gifts were collected as part of this year’s Christmas Giving Tree appeal, which is organised by Wests Group Macarthur every year.

For this year’s appeal Wests joined forces with Big Yellow Umbrella, who work with many different local community groups and agencies that offer assistance to families in need, as well as organisations such as FACS, Bright Futures, CatholicCare and Our Pantry.

Children and families receiving gifts this Christmas via the Wests Giving Tree appeal also need to thank some of the amazing volunteers who helped wrap the gifts last week.

The volunteers, who came from all walks of life, did not flinch when they saw the mountain of presents to be wrapped at Wests Leagues club.

Indeed they were all excited to be joining Wests staff and Big Yellow Umbrella members to sort and wrap presents for those less fortunate among us.

Job well done: the volunteers celebrate completing the big task of wrapping all those presents.

“The gift wrapping day was a true example of the Christmas and community spirit here in Macarthur and showcased what can be achieved in a few short hours with everyone working together,’’ said a Wests spokesperson.

As usual Wests Members, staff and the Macarthur community did not disappoint with more than 100 gifts donated across the four venues.

Wests Group Macarthur boosted the toy haul with an $1,000 donation.

“Wests and Big Yellow Umbrella believe that every child should experience the joy of opening a gift on Christmas morning and these gifts will go a long way to brightening Christmas Day for hundreds of local children who would otherwise not have a gift to open,’’ the spokesperson said.