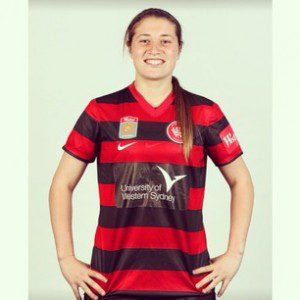 The Wanderers women’s team open their 2014 W-League season against premiers Canberra United this Sunday, September 14 at Campbelltown Stadium from 3pm.

And when they announced their 2014 squad, the Wanderers reaffirmed their commitment to the development of Western Sydney football.

With a desire to unearth and develop young Western Sydney talent, head coach Norm Boardman has brought in a number of new faces that will see the west strongly represented in the highest level of women’s football in Australia.

The entire region is represented in the squad with players ranging from Campbelltown to Wentworth Falls.

Giving the next generation of stars the opportunity to go to the next level of their development is an important mantra for the Wanderers and this season’s squad is bursting full of young talent.

Out of the ten new Australian signings, nine have come through the NSW Institute development program with six of those recently representing Australia in under age competition while also winning the NPL NSW Women’s 1 Grand Final last Sunday.

“Today’s squad announcement is a proud moment for football in Western Sydney and will aid the long-term health of women’s football in this region,” Boardman said.

“We are establishing a pathway to ensure women’s football in Western Sydney continues to grow stronger and giving these players an opportunity in the top-flight is in line with the club’s overarching culture and philosophy.

“Our new girls are working to be the next generation of Australian Matildas and having players such as Caitlin Cooper and Linda O’Neill to teach and support them as they develop will be invaluable.”

The 10 new Australian signings will join 2013/14 Player of the Year Linda O’Neill and new visa signing Hannah Beard in a squad that blends together youth and experience.

Matilda Caitlin Cooper also returns for her second season with the Red & Black. During the lead up to the first game of the season, the Wanderers also announced the loan signing of Seattle Reign captain Keelin Winters for the Westfield W-League 2014/15 season.

Fresh off leading her National Women’s Soccer League club to the final, Winters is expected to be available for selection in the match against Canberra this Sunday.
Daughter of two-time NBA All Star Brian Winters, the defensive midfielder captained the USA to victory in the U20 World Cup in 2008 and will add experience and steely resolve to the Wanderers’ youthful squad.
Winters joins Hannah Beard as the Red & Black’s second foreign signing with room in the roster for one more.