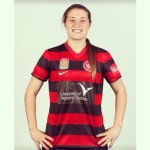 The Wanderers women’s team open their 2014 W-League season against premiers Canberra United this Sunday, September 14 at Campbelltown Stadium from 3pm. And when they announced their 2014 squad, the Wanderers reaffirmed their commitment to the development of Western Sydney football. With a desire to unearth and develop young Western Sydney talent, head coach Norm… Read more »