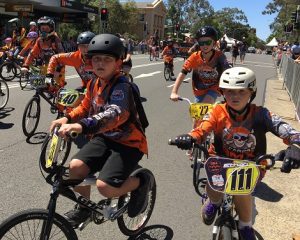 A BMX track could soon become a reality in Campbelltown, thanks to a plan by the mayor, George Brticevic.

Mayor of Campbelltown George Brticevic became determined to build a local BMX track after seeing a group of riders in the Fisher’s Ghost festival parade earlier this month.

“It was very impressive seeing all the BMX Bandits riding their bikes in our parade, but I was a bit disappointed to find out they were out of Elderslie and that we didn’t have a track in Campbelltown,’’ Cr Brticevic told Tuesday night’s council meeting.

He got full council support for a report into the feasibility of a BMX track alongside the recently opened St Helens Park skate facility.

Cr Brticevic also suggested that soil from earthworks associated with a carpark to be built on the site be used towards the creation of a BMX track.

“This could end up being cheaper than carting the soil away,’’ he said.

In other decisions on Tuesday night:

• Council backed Cr Paul Lake’s plan for a sports venue sponsorship policy to attract big time sport of all kinds to Campbelltown. The first step is the preparation of a report looking into how this would work and how much money would be needed to make it a success.

• Council rejected plans for a boarding house with nine rooms in Allman Street after the deputy mayor, Cr Meg Oates hit out at the application as not being up to the standard expected in Campbelltown. “This is just not good enough,’’ Cr Oates told council.

“Why would anyone think one toilet for five people is acceptable,’’ added Cr Karen Hunt.

• Councillors gave the green light for the closure of a walkway in Ambarvale used by trailbike riders to escape detection by police. The walkway is situated between Mantalini Street and Copperfield Reserve.

• They also approved a $4,400 contribution towards the council staff Christmas parties, half of each going to the indoor and outdoor staff end of year functions.

More than 40 years experience in the news media, most of them as editor of local newspapers across the Sydney metro area, but a few years working as a sub-editor with the metros. Lots of awards, both as a reporter and editor, but says he values just as much Community Service Awards from Campbelltown City Council in 2004 and 2016. Took a voluntary redundancy in 2014 from Fairfax Community Newspapers after 21 years there. Loves the digital world, because ''there's no question it's the future''. Eric promises his hard hitting but fair approach won't change when he reports the news via cyber space.
View all posts by Eric Kontos
Residents urged to register their opposition to intermodal
Latest health snapshot: smoking down, immunisation up