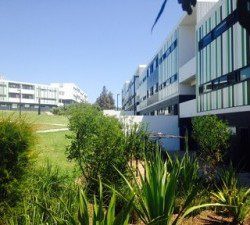 No ghetto here: inside the Campbelltown campus of the University of Western Sydney

I really don’t like commenting on other media if I can avoid it, because that’s precisely what they want.

That was the case in the Struggle Street reality SBS show about the lives of some Mt Druitt people doing it tough.

Blacktown Council’s garbage truck protest was understandable, but all it achieved in the end was to get more publicity for SBS, who would have lapped it all up and enjoyed record ratings when the show went to air that night.

Following on from that, the Sunday paper that’s slowly but surely about to disappear into the garbage bin of history, Fairfax’s increasingly irrelevant Sun-Herald, today sports the headline SYDNEY GHETTO ALARM on its front page.

Of course you’ve got to remember this paper is aimed at its dwindling readership mostly found east of Strathfield.

They know that hardly anyone in the western suburbs would waste their hard earned on such nonsense.

Don’t worry, my subscription will be torn up come June 30; I too have had enough of paying for a paper that tells me I’m either a loser or I live in a sea of losers.

These “Sydney’s big divide’’ stories appear on a regular basis in the Fairfax papers.

There’s always another study/survey/enquiry/research program published in these papers that shows people in the western suburbs are fatter, uglier, smoke more and earn a lot less than people in the eastern suburbs, etc.

I did make up the bit about being uglier, but given time…

Everyone knows, including no doubt their readers in Balmain and Double Bay, that you can do some interesting things with statistics.

It may just depend on your desired outcome.

This is stereotyping of a couple of million hard working, family oriented, honest, law abiding Australians.

Whether you live in Penrith, Campbelltown or Blacktown you know what the truth is.

And that truth is that we are blessed to have such close knit communities and to be living so close to pristine bush, riverside parks, wineries, botanic gardens, Wollongong’s beautiful beaches, great restaurants that don’t charge like a bull, a great university, wonderful schools – the list goes on and on.

What we don’t have is 24 hour traffic congestion and noise and pollution.

We don’t live in units piled high and crammed next to each other – we have quarter acre blocks with nice homes and gardens and backyard big enough for a decent cricket match.

As a regular reader, I was not surprised to see an apology on page 2 of this paper about a story they published the week before. These apologies/corrections/clarifications are such a regular occurrence surely they need to think about changing their front page masthead motto from the pompous INDEPENDENT. ALWAYS to something more meaningful like: STUPID. MOSTLY.

More than 40 years experience in the news media, most of them as editor of local newspapers across the Sydney metro area, but a few years working as a sub-editor with the metros. Lots of awards, both as a reporter and editor, but says he values just as much Community Service Awards from Campbelltown City Council in 2004 and 2016. Took a voluntary redundancy in 2014 from Fairfax Community Newspapers after 21 years there. Loves the digital world, because ''there's no question it's the future''. Eric promises his hard hitting but fair approach won't change when he reports the news via cyber space.
View all posts by Eric Kontos
Popovic only man for the coaching job, say Wanderers
Forum to tackle disabled and justice system taboos