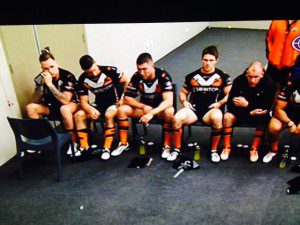 Tough times: the Wests Tigers players in the sheds at half time trailing the Bulldogs 24-nil.

A lot more steel in defence in the last 40 minutes helped the Wests Tigers avoid a whitewash against the Canterbury Bulldogs at ANZ Stadium tonight in the opening match of  round 24 of the 2014 NRL premiership.

Indeed the Tigers won the second half 10-6 after going to the sheds at half time trailing 24-nil.

Footy experts would have expected Wests to capitulate in the second half, as they had in their past two matches against the premiers Sydney Roosters and the North Queensland Cowboys.

The Tigers scored first  in the second stanza, when halfback Luke Brooks picked the ball up near his own try line and then ran 90 metres to score at the other end.

Unfortunately for the young half, running all that distance on a heavy ground – there were showers at Homebush before the match as well as another heavy one at half time -he suffered a slight hamstring injury and he did not return to the field of play. He should be OK to return next week, though.

The Wests Tigers then had a small period when momentum swung their way, and there was a flicker of hope they may sneak a win, but they dropped the ball at critical times and eventually paid the price.

About half way through the second half the Bulldogs scored adjacent to the post, and with the try converted went to a 30-4 lead, and that was the ball game basically.

Aaron Woods pounced on a Robbie Farah grubber right on the final siren and the video referee agreed with the big bearded prop forward that he had planted the ball legally.

The conversion made it 30-10, a much more respectable score than most Wests fans would have been dreading after the first half.

But it was another disappointing loss, despite a line up that is almost unrecognisable from the one that vstarted the 2014 season.

They are injury ridden, sure, but the Wests Tigers fans would have expected their team to show a bit more fight tonight.

After 40 minutes of football, the Wests Tigers were trailing 24-nil, and faced the prospect of another heavy defeat.

The Tigers had a stack of excuses: they have a five-eighth, Blake Austin, playing at fullback, and a forward, CoreyPaterson, playing on the wing.

On top of that they have a raft of first graders out for extended periods or for the whole season.

And two players named in the team for tonight’s game, Keith Galloway and Kurtis Rowe, did not take their places after succumbing to injuries. Which meant more changes to a lineup ravaged by earlier injuries.

But even so, four converted tries – four easy tries – in the first 40 minutes of football meant the effort wasn’t there, especially in defence when the opposition had the ball near the Wests Tigers tryline.

In attack, the few chances the Tigers created were botched by indecision or just incompetence.

But it has to be said that they came out of the sheds in the second half and put a little bit of pride back into the team.

Which is something they can build on in their last two matches of the season, against the Sharks and the Raiders.