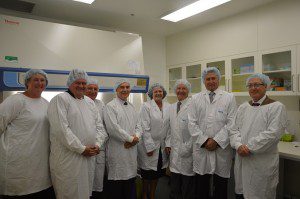 Board members and the executive team from Wests Campbelltown have been given the first official viewing of the Ingham Institute’s Cytotoxic Biosafety Cabinet, a vital piece of equipment that will be used to conduct pre-clinical research on potential new therapeutical agents or drugs for cancer.

Wests recently funded the equipment, made possible from a $20,000 donation from the club as part of the 2014 ClubGrants program.

The Cytotoxic Biosafety Cabinet, which is now up and running in the Institute’s Biological Resources Unit, will help to fast-track the development of new therapeutical agents, for pancreatic and prostate cancer treatment in particular.

The equipment aids cancer research performed in biological models of human cancers which are treated with experimental drugs that can be toxic. The safety cabinet helps to create a safe and sterile environment for Ingham Institute researchers to conduct this potentially life-saving work, while also protecting researchers from any potentially toxic impacts from experimental drugs.

“Cancer continues to be a major health concern for communities in South Western Sydney and Australia at large,” Professor Barton said.

“This valuable piece of equipment is a vital necessity for our cancer researchers and will ensure their safety whilst they work towards developing new treatments for this devastating disease.

“On behalf of the Ingham Institute Board of Directors I would like to thank Wests Campbelltown for their substantial contribution, which will play a big role in helping to improve the health and lives of Australian cancer patients, their carers and families.”

CEO of Wests Campbelltown, Tony Mathew, said that the club was happy they could provide funding for the purchase of this piece of equipment.

“It was great to finally see this important piece of equipment that will play a focal role in improving the health and wellbeing of cancer patients in Campbelltown and beyond. Further, it will meet the Ingham Institute researchers’ needs who are conducting this life-saving work,” Mr Matthew said.

About the Ingham Institute:

The Ingham Institute is a not-for-profit research organisation in south west Sydney established to undertake medical research that specifically addresses, and can be applied to, the needs of the local population and wider Australia. Located at Liverpool Hospital, the Ingham Institute is changing the way medical research is done in Australia by transferring research into practice across its six research streams, enabling the swift transfer of findings into day-to-day medical practice. The Institute’s research team are focused on exploring new medical approaches for a range of critical disease including cancer, clinical science (comprising cardiovascular disease and infectious and inflammatory diseases), community and population health, early years/childhood health, injury and rehabilitation and mental health  and are at the forefront of the most advanced medical breakthroughs and clinical outcomes.

More than 40 years experience in the news media, most of them as editor of local newspapers across the Sydney metro area, but a few years working as a sub-editor with the metros. Lots of awards, both as a reporter and editor, but says he values just as much Community Service Awards from Campbelltown City Council in 2004 and 2016. Took a voluntary redundancy in 2014 from Fairfax Community Newspapers after 21 years there. Loves the digital world, because ''there's no question it's the future''. Eric promises his hard hitting but fair approach won't change when he reports the news via cyber space.
View all posts by Eric Kontos
Badgerys Creek intermodal push kicks off
Adam Blair released as Wests Tigers look to young guns for success