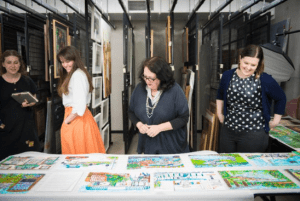 Best selling author, comedian and ABC Radio Sydney Mornings presenter WENDY HARMER, who has curated an exhibition from the Casula Powerhouse arts centre collection of more than 5,000 artworks, writes here that Casula Secrets reveals some of the interesting and mysterious stories of this South West Sydney suburb:

Casula is often called Sydney’s “secret suburb” – a place that doesn’t easily give up its hidden treasures and ghostly secrets.

I wonder if the mystery began with its colonial name – Casula – which derives from the Latin meaning “little house” or, more mysteriously, “hooded cloak”.

It was the name bestowed by the 1800s agriculturalist Richard Guise on his farm here – “guise”, “hooded cloak”.

Hmmm. Was it a sly joke on the locals, or was the name “little house” a simple comfort for a farmer so far away from his birthplace in France?

The traditional owners of this land, the Cabrogal Clan of the Darug Nation, lived near the Georges River when European settlers arrived.

The Darug Nation and the Dhurawal Nation also occupied this place.

Skilled hunters, fishers and gatherers, this had been their home for millennia.

After the first violent encounters with Europeans, the Aboriginal people remained in the secluded hills and valleys and found a way to keep their connection to country.

Stories are still being gathered that reveal the rich Aboriginal history of the Georges River.

In 2012, a paranormal declared Casula to be the “spookiest spot in Australia” and this Powerhouse the most “terrifying” place he had ever investigated.

Built in the 1950s and abandoned a mere two decades later, the Casula Powerhouse has often been regarded as an eerie edifice, said to be inhabited by the souls of people who died here.

Is it haunted by the ghost of bushranger Jack Donohoe, the “Wild Colonial Boy”?

That seems an improbable tale.

Children drowned in the nearby river, others were killed on the train tracks and Collingwood House – built in 1810 as the home of a Nantucket whaling captain, Eber Bunker – is said to house the spirits of a “matronly” woman and a young girl.

There are urban legends aplenty in Casula.

From the riches in the Powerhouse collection, I’ve put together a small collection of odd and intriguing pieces. I hope it gets you thinking about the myriad stories of all those who have come from everywhere to make their home in this “little house” of Casula.

More than 40 years experience in the news media, most of them as editor of local newspapers across the Sydney metro area, but a few years working as a sub-editor with the metros. Lots of awards, both as a reporter and editor, but says he values just as much Community Service Awards from Campbelltown City Council in 2004 and 2016. Took a voluntary redundancy in 2014 from Fairfax Community Newspapers after 21 years there. Loves the digital world, because ''there's no question it's the future''. Eric promises his hard hitting but fair approach won't change when he reports the news via cyber space.
View all posts by Eric Kontos
First home buyers snap up stamp duty relief
MP slams lack of commitment to Badgerys airport rail infrastructure