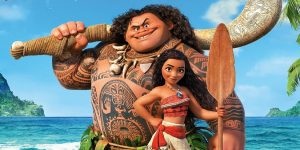 Experience the magic of the popular Disney film Moana when Macquarie Fields Leisure Centre is transformed into an outdoor cinema for Floovies on February 17.

Bring a blanket, camping chair or hire a pool ring and get comfortable to watch the animated musical adventure under the stars, on a 12 square metre screen.

The PG-rated film, which introduces Auli’i Cravalho as Moana and features the voice of Dwayne Johnson as Maui, tells the story of a strong-willed daughter of a Polynesian village chief, who embarks on a quest across the Pacific Ocean to save her people.

Mayor of Campbelltown, Cr George Brticevic, said Floovies – or floating movies – was a first for Campbelltown City, and was a similar concept to the outdoor cinema on offer at Fisher’s Flicks at Bradbury Park each November.

“It’s a novelty watching a film under the stars, on an extra big screen, and Floovies not only gives locals the opportunity to watch from the grandstand or grass areas, but also from a floatie in the pool,” he said.

“I’m sure both children and adults will get a kick out of the event, and out of the movie itself, Moana, which is popular with moviegoers of all ages.”

Cr Brticevic said part of what made Campbelltown such a great place to live was the significant sport and recreational opportunities, community events, activities and exhibitions on offer across the city throughout the year.

“Floovies is part of Council’s commitment to ensuring our residents have access to new, exciting and affordable activities, and to making the most of our great facilities like Macquarie Fields Leisure Centre,” he said.

“The event will be a great opportunity to get together with friends or family, and enjoy what’s left of the warm summer weather at a movie night with a difference.”

Floovies will begin at 6pm, with a limited number of inflatables for hire from 6pm for $3. The film will start at 6.30pm.