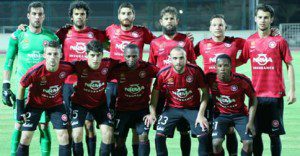 Win: the Wanderers team photo was posted on their Facebook page earlier today.

The Western Sydney Wanderers came back from a goal down to beat Al Jazira today 2-1 in the IPIC Championship in Abu Dhabi.

But despite the result, the tournament title went to Al Jazira on goal difference.

In another steamy night the Al Jazira fans were out in force creating a great atmosphere for the final match in the tournament.

Both teams held their own in the initial sparring however it was the home side that found the early break.

Al Jazira’s new Argentinian recruit Lanzini’s clever through ball behind the Wanderers defence found Jucilei who cut inside Hamill and blasted the ball into the roof of the net.

The Wanderers hit back almost immediately through Iacopo La Rocca’s header at the back post off a beautifully floated Saba corner beating the keeper and an attempted last ditch bicycle kick off the line to get the equaliser.

Lanzini was busy throughout the match but was largely contained by the Wanderers defence.

Saba, who had a strong first half, again made the Al Jazira defence panic with a whipped cross in the 20th minute just out of reach of Haliti at the far post.

Haliti was on goal again in the 30th minute but his shot was smothered by Khaled Al Sanani.

With both sides creating good chances in the opening half no-one could break the deadlock going into the break at 1-1.

The Wanderers took control in the second half creating a number of good chances and in the 60th minute got their reward.

Bridge, deployed on the left wing, took the ball past two Al Jazira defenders before sliding a perfectly weighted ball across the 18-yard-box for Appiah to run onto.

With a controlling touch Appiah slotted the ball past Al Senani to get his first goal for the club since scoring against Japan’s Shimizu S-Pulse in last season’s pre-season tour.

Chances came at both ends to change the scoreline and with the clock winding down the Wanderers held on to win.