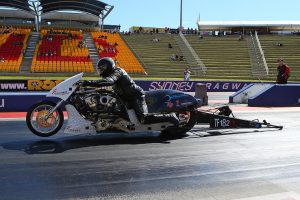 Doing it for NSW: Chris Porter is heading to Darwin to save the pride of our state this weekend.

Chris Porter, a 51 year old Top Fuel Motorcycle racer from Kemps Creek, will be trying to save NSW’s pride this weekend.

The current reigning champion is looking forward to taking on all comers but is wary of Queenslander Damian Muscat.

Especially with Queensland shooting for a clean sweep in the third rugby league State of Origin clash next Wednesday in Sydney.

The battle on two wheels between Muscat and Porter will resume as part of Hidden Valley Raceway’s Nitro Up North event in Darwin starting today and finishing tomorrow (July 8-9).

Porter sees it a little differently.

“It has always been a bit like this (state against state) in the category, but more like a tri-state of origin with all the West Aussies,” he said.

“With Chris Matheson in the past I am used to going up against the Queenslanders,’’ Porter said.

“With Muscat in the show now it just means I have another Queenslander to beat.

As well as state pride Porter also has the championship on his mind.

“It was good to get the number one back after some tough competition from Matheson and Mark Drew, and keeping that on the bike is always on all of our minds,” he said.

“I am certainly looking forward to heading to Darwin.

“I was runner-up there last year and this year we will be going for the win and some personal bests, while looking to start our title defence.”

More than 40 years experience in the news media, most of them as editor of local newspapers across the Sydney metro area, but a few years working as a sub-editor with the metros. Lots of awards, both as a reporter and editor, but says he values just as much Community Service Awards from Campbelltown City Council in 2004 and 2016. Took a voluntary redundancy in 2014 from Fairfax Community Newspapers after 21 years there. Loves the digital world, because ''there's no question it's the future''. Eric promises his hard hitting but fair approach won't change when he reports the news via cyber space.
View all posts by Eric Kontos
New health plan focus is on south west youth
Turn on the lights at Catherine Park Estate