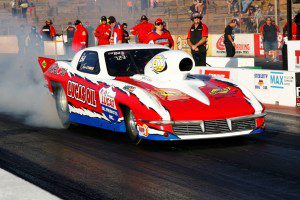 The 2015/2016 Summit Racing Equipment Sportsman Series came to a close on the weekend with the coronation of 10 champions, including two from Macarthur.

Now he has two Silver Trees and two Gold Trees after sweeping the ANDRA Championship Grand Final and the Top Sportsman Championship.

It was a slogfest as first Jason Arbery in Round 1 and then Stuart McBain and Darren Saliba in Round 2 had their title hopes dashed.

That left Stares and Paul Russo to battle it out at Adelaide International Raceway, but Russo fell in the semi final – opening the door for Stares.

“This is just unbelievable,” Stares said.

“We tied the Championship up in the semis and we didn’t think it could get any better and then we come out of the final with a Gold Christmas Tree, it’s just out of control.

“There are a lot of people to thank. The sponsors that helped me chase it all this year. Lucas Oil Products, VPW, Proflow, Sunoco Race Fuels, anyone else I’ve forgotten I’m sorry.

“My crew, my family – special thank you to my sister who has travelled the country, my Uncle Bob, Aaron, my wife and kids who couldn’t be here this weekend, it’s just unbelievable,” Stares said.

The other Macarthur participant to win a championship in Adelaide on the weekend was Darryl Stephen, who hails from Orangeville.

In Safe Site Traffic Solutions Super Gas, Darryl Stephen outlasted his title rivals to claim the Super Gas Championship for a second time and rubber stamp it with a final win for the weekend double.

More than 40 years experience in the news media, most of them as editor of local newspapers across the Sydney metro area, but a few years working as a sub-editor with the metros. Lots of awards, both as a reporter and editor, but says he values just as much Community Service Awards from Campbelltown City Council in 2004 and 2016. Took a voluntary redundancy in 2014 from Fairfax Community Newspapers after 21 years there. Loves the digital world, because ''there's no question it's the future''. Eric promises his hard hitting but fair approach won't change when he reports the news via cyber space.
View all posts by Eric Kontos
Second half take off propels Jets to victory
Outdoor exploration the kids will love these holidays