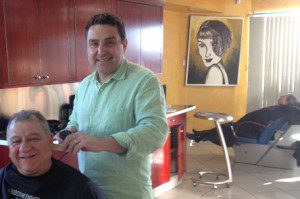 Off with his hair: Tony at work in Attz Hair.

Twenty five years ago a young couple called Tony and Tina opened a hair salon in Queen Street, Campbelltown. Their ultimate dream was to have a beautiful salon that would not look out of place in Double Bay. This week, looking for somewhere to get my hair cut, I was walking along Queen Street, just past the Noodle House when I looked up to see if the Attz Hair sign was still there at number 251 – and it was.

So I went up the steps and walked into one of the most luxurious hair salons I have ever been in. Tony, who was working away on a female client, waved me over and when I sat down we started talking like it was only last week we saw each other. It had actually been more like 15 years or thereabouts.

We caught up with our personal lives while Tony relieved me of my curls and then he told me a funny story about one of his favourite customers, the Member for Macarthur Russell Matheson.

And when he finished my hair and showed me his handiwork I remembered he was very skilled at his craft. Mind you, I don’t know if I’ll go back there: he charges a bit more than my wife when she does my hair!

My reunion with Tony reminded me that the people who really changed Campbelltown for the better in the past 30 years had been people like himself and his wife – small business people with big dreams.

More than 40 years experience in the news media, most of them as editor of local newspapers across the Sydney metro area, but a few years working as a sub-editor with the metros. Lots of awards, both as a reporter and editor, but says he values just as much Community Service Awards from Campbelltown City Council in 2004 and 2016. Took a voluntary redundancy in 2014 from Fairfax Community Newspapers after 21 years there. Loves the digital world, because ''there's no question it's the future''. Eric promises his hard hitting but fair approach won't change when he reports the news via cyber space.
View all posts by Eric Kontos
Labor slams Baird over motor registry moves
Power on: Rebate for electric wheelchairs