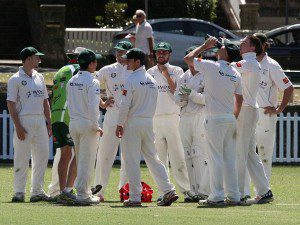 Ghosts first grade failed to stay alive in the finals by three runs.

Chasing Penrith’s 235, the Campbelltown Camden Ghosts first grade cricket side managed to reach 233 before they were all out on Sunday.

Three more runs and the Ghosts would now be a step closer to winning their first ever Belvidere Cup premiership.

But it was not to be so the club will have to regroup and try again next summer.

Not that it’s completely the end of the season for the Ghosts.

Its fifth grade side, which is made up of young players – the future of the club – has won its semi final and is on track to claim the ultimate prize.

Fifths won the minor premiership after finishing on top of the ladder and hosted Sutherland at Raby Sport Complex over the weekend.

Chasing just 160 for victory, the Ghosts youngsters lost just four wickets when stumps were called at the end of day two with the home side well on top at 4/282.

Vincent Hreszczuk (67) and Nick Appleton (60) were the backbone of the innings with a second wicket 127 run partnership.

Ghosts will host Gordon this weekend, with play in the semi final starting from 10am on both days.

No doubt plenty of first grade Ghosts players will be there to support their young teammates this weekend.

They may also ponder how they missed a golden chance to be still alive in the 2015-16 finals by those three runs.

The first grade semi final was played at Howell Oval, Penrith, and the Ghosts looked set to win after restricting the home side to just 235.

But it all could have been much more straightforward for the Ghosts – Penrith at one stage were on their knees at 8 for 60.

Ghosts must be kicking themselves for not delivering the final blows and allowing Penrith to finish with 235, off the back of a partnership of 172 for the ninth wicket.

At the end of day one it looked like the Ghosts were on their way after compiling 70 without loss.

But then the wickets started to fall.

The Ghosts lost their first wicket at 81 but then their key man, Ryan Gibson, was freakishly runout for just five runs.

With the Ghosts at 7-182, Ashley Paddison, batting at number 8, was superb on his way to 33 runs from 81 balls and seemingly victory for his team.

He added 22 with Luke Webb for the 8th wicket before Webb was also unlucky to be dismissed LBW for 9.

Paddison was eventually out leaving the last pair Jordan Browne and Josh Dunning 16 runs to get. Jordan Browne batted wonderfully for his 12 not out given his previous day’s finger injury striking two boundaries.

He supported Paddison with determination and then looked for all money to combine with Dunning to get the Ghosts home.

Dunning, who looked solid, was caught for 9 and it was all over for another year for the Ghosts.

Thanks to a lousy three runs.