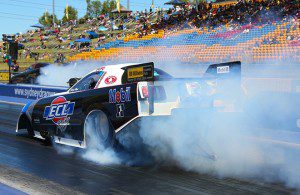 Phil Lamattina has taken out the ANDRA championship after a fiery battle at the Australian Nationals hosted by the Sydney Dragway on the weekend.

On a weekend of drama, action and excitement, The Top Fuel title fight between Phil Lamattina and Allan Dobson lasted only one round on race day but the tension was thick as both knew they could be just one loss away from a season up in smoke.

When all was said and done, Lamattina secured the ANDRA Championship Gold Christmas Tree when Dobson was eliminated by his own Rapisarda teammate Damien Harris in Round 1.

Lamattina then smoked the tyres at around half-track in a defeat to Peter Xiberras but it wasn’t enough to ruin his day earning a second ANDRA Drag Racing Series Top Fuel Championship.

“Obviously I was quite relieved when Dobbo went down,” Lamattina said. “It was hard to get too excited because I still had a job to do and that didn’t work out too well for me.

“The Championship win has been a lot of hard work from a lot of people and especially Aaron (Hambridge), the crew, Fuchs sticking by us for 10 years.

“What a way to repay them. And the whole family, especially my wife, she’s the rock.

“It’s my second son’s birthday today and I always said, ‘what do you want for your birthday?’ And he said; ‘a championship’ so we got that and he’s pretty wrapped.”

Phil’s brother John lifted the Gold Tree for a LTFR double defeating Terry Sainty, Damien Harris and finally Peter Xiberras with a flaming 4.831 elapsed time at 306.67 mph from a 4.893 at 279.38 mph.

“We’re very happy after a good year,” said John Lamattina. “We’ve been strong all year and just haven’t quite got the win but to get our first win I’m really happy and proud. But really happy for Phil to win the Championship.

“I’m happy with our ETs and really happy with the reaction times so it was a pretty good weekend all up. Thanks to the crew, Aaron (Hambridge) and everybody.”

There he met Lee Bektash who recorded the quickest and, to this point, the fastest Pro Stock pass in Australia on a whopping 6.877 ET at 199.85 mph during a solo pass in Round 1.

That spectacular run came before a sketchy pass where only a great drive job kept his Dodge Mopar off the wall to advance past John Barbagallo in Round 2.

Spinozzi got loose crossing the centre line on what was shaping up as a great side by side pass while Bektash backed up his earlier record setting runs on a 6.911 at 199.11 mph to reach the final.

Bektash not only defeated Nino Cavallo on a 6.920 from a 6.985 in the final, but he did so by reaching a new record 200.14 mph to break one of the last barriers still standing in the sport of ANDRA Drag Racing.

“I feel pretty overwhelmed,” said Bektash. “It’s a lot of hard work for over twelve months.’’

In Top Fuel Motorcycle, Gavin Spann picked up his first Australian Nationals title win since 1985 on a solo 7.540 ET.

In Pro Stock Motorcycle Luke Crowley was unable to get his bike started in yet another match up with Maurice Allen who advanced straight to the final on the resulting solo 7.333 second pass. Scott White was his opponent after going solo on a 7.511.

Although breakages accounted for most of the field, Allen and White managed to show what Pro Stock Motorcycle is all about in a close encounter settled by a holeshot.

Allen’s 7.297 ET from White’s quicker but losing 7.264 was enough to get the job done and give Allen his first ANDRA Drag Racing Series round win in 2014.

The ANDRA Drag Racing Series now comes to an end for 2014 and will resume once again in January 2015.

For full results and details go to: http://andra.com.au/series/results.html 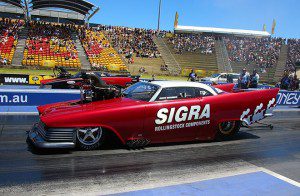 More than 40 years experience in the news media, most of them as editor of local newspapers across the Sydney metro area, but a few years working as a sub-editor with the metros. Lots of awards, both as a reporter and editor, but says he values just as much Community Service Awards from Campbelltown City Council in 2004 and 2016. Took a voluntary redundancy in 2014 from Fairfax Community Newspapers after 21 years there. Loves the digital world, because ''there's no question it's the future''. Eric promises his hard hitting but fair approach won't change when he reports the news via cyber space.
View all posts by Eric Kontos
Carnival’s thrills and spills bigger and better
The food, the wine, nature at its best: Tasmania has got it all