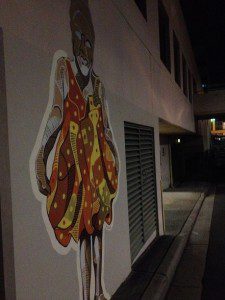 The laneways in the Liverpool central business are becoming alfresco art exhibition spaces in a move by Liverpool Council that can only be given a big tick.

The Street Art program, which will cost around $60,000, is based on the City of Sydney Streetware program model which aims to beautify and activate the city centre through the implementation of public artworks.

The program consists of commissioning artists to design artworks for public installation in consultation with community members and local businesses.

The objectives of the Street Art program include:

• increased beautification of the city centre by reducing the visibility of graffiti vandalism;
• increased perceptions of safety; and
• fostering community engagement. 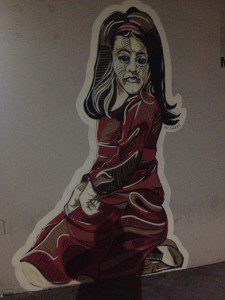 The first laneway to get the treatment has been Warren Serviceway, where our pictures are from.

More than 40 years experience in the news media, most of them as editor of local newspapers across the Sydney metro area, but a few years working as a sub-editor with the metros. Lots of awards, both as a reporter and editor, but says he values just as much Community Service Awards from Campbelltown City Council in 2004 and 2016. Took a voluntary redundancy in 2014 from Fairfax Community Newspapers after 21 years there. Loves the digital world, because ''there's no question it's the future''. Eric promises his hard hitting but fair approach won't change when he reports the news via cyber space.
View all posts by Eric Kontos
Paul Marantz set for high flying future after years as pro golfer
Taylor tweaks Tigers for must win clash with Titans