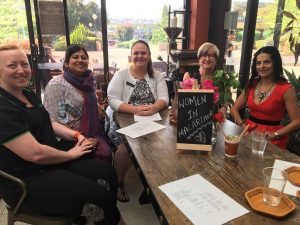 The Macarthur region, from Campbelltown through to Camden and Wollondilly, is home to a growing number of successful women.

They are in senior management positions such as general managers of councils or political leaders, including mayors of councils.

But by far most of the successful local women are running their own small and not so small businesses.

At the same time, more and more women are opting out of the long commute to Sydney and setting up their own enterprises in Macarthur.

For these new female entrepreneurs a “women in Macarthur’’ function on International Women’s Day is certain to resonate.

While everyone is welcome to attend the high tea event on March 8, if you are a woman and have recently launched your business or are thinking about starting one, there will be plenty of experience and inspiration on offer.

There will be three inspirational women who will speak on the day, including Campbelltown councillor Margaret Chivers.

Another is Polly Grundy, the founder and president of the Mark Grundy Oesophageal Cancer Awareness Group Incorporated (OCAGI).

Ms Grundy, a successful businesswoman, is also a director of the Campbelltown business chamber and was recently elected to the board of directors at Ingleburn RSL, the first woman to do so in the 40 year history of the club.

Also slated to speak is Stacey Copas (http://academyofresilience.com/), who has been a quadriplegic for 27 years, and is an international keynote speaker with a large following on social media.

Organisers say they hope that as well as three inspirational speakers there will be plenty of discussion and debate about shared concerns of those present.

Women in Macarthur high tea will be held between 10.30am and 12.30pm on Thursday, March 8 in the Campbelltown Civic Centre, Queen Street, Campbelltown.

• To book your seat to the function visit https://www.eventbrite.com.au/e/lets-celebrate-women-in-macarthur-on-international-womens-day-tickets-42743697550

More than 40 years experience in the news media, most of them as editor of local newspapers across the Sydney metro area, but a few years working as a sub-editor with the metros. Lots of awards, both as a reporter and editor, but says he values just as much Community Service Awards from Campbelltown City Council in 2004 and 2016. Took a voluntary redundancy in 2014 from Fairfax Community Newspapers after 21 years there. Loves the digital world, because ''there's no question it's the future''. Eric promises his hard hitting but fair approach won't change when he reports the news via cyber space.
View all posts by Eric Kontos
Lakeside elegance perfect for a memorable wedding
Appin to reap $10m infrastructure boost if rezoning goes ahead