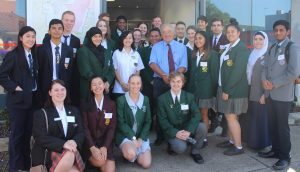 “I have no doubt that our region will be in great hands in the future,’’ says Dr Mike Freelander.

The Federal Member for Macarthur had nothing but praise for local students after hosting the 2018 Macarthur Student Leadership Forum as part of NSW Youth Week celebrations.

“It was an honour to discuss what truly matters to our young people and learn of their amazing achievements and future ambitions,’’ Dr Freelander said.

More than 30 local school captains and student representatives met with Dr Freelander to discuss the achievements and goals of local school communities, what assistance the Macarthur community could provide to young people and how Dr Freelander could facilitate the growth of local student leaders.

“The student leaders’ forum was not only a great opportunity for me to meet local school captains, but also for captains to network between themselves,’’ the MP said.

“The stronger our community ties, the better our schools and young people will be.

“I thank our student advocates for entrusting me with their vision of our area.’’

Dr Freelander has announced that Labor has launched its national campaign calling on the Turnbull Government to properly fund preschools in the upcoming Budget.

“The Turnbull Government’s lack of support for preschool means families and staff in the Macarthur can’t plan for the future,’’ he said.

“With funding due to expire at the end of next year, 2,364 children in the Macarthur are left in limbo.’’

Dr Freelander says Labor is calling on the Turnbull Government to commit long term funding for universal access to preschool.

“There is no doubt that access to four year old preschool gives our children the best head start to school and for life,’’ he said.