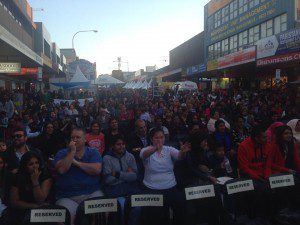 Liverpool’s 2014 Starry Sari Night on Sunday was even bigger and better than last year with thousands of people swarming to George and Scott Streets to get amongst the excitement.

Liverpool’s City Centre was full of vibrancy, setting the tone for an inclusive celebration of cultural fusion and all things Bollywood.

Liverpool City Mayor Ned Mannoun said: “Starry Sari Night was definitely one of the most memorable events so far this year. Whether it was food, film or fashion you were after, it had something for everyone.”

The stand-out winner selected by Fast Ed was Akash Pacific Cuisine Continental and Indian Restaurant who presented their finest Lamb Curry which was their most popularly voted dish from their menu.

The Sari Fashion Parade lit up the stage with bold colours, dazzling fabrics and stunning Bollywood inspired glamour with 30 models taking to the runway wearing designs from 14 local Sari Shops.

As Mayor Mannoun said in his welcome, “George Street Liverpool is the premier street in Australia for sub-continental fashion.”

“It’s events like this that unlock Liverpool’s true potential and show the world this great city we are building here in the Great South West,” he said.

“Providing high quality iconic events that support the local night-time economy and showcase the area are part of Council’s strategy to make Liverpool a more dynamic and active city.’’

The night concluded with a selection of cuisines to enjoy with on street dining and a fun-loving Bollywood Film. The next big community celebrations that you won’t want to miss are Casula Powerhouse Arts Centre’s Sweet As Festival on October 11, 10am-4pm and Liverpool’s Spring Expo to be held on Saturday, October 25, 10am-3pm in Bigge Park. 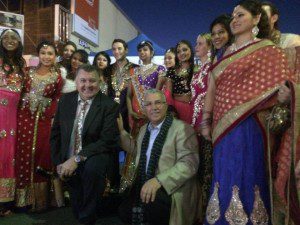 Colour and movement: Mayor Ned Mannoun at the back, with MP Craig Hughes and Councillor Mazhar Hadid at front.

Eschalot’s treats make drive to Berrima worth it
Facebook: friend or foe