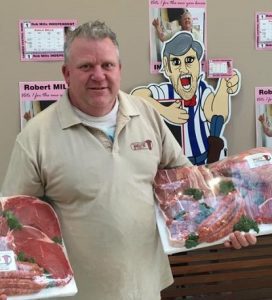 Meat the new councillor: Mt Annan butcher Robert Mills has romped in to Camden Council for the next four years.

Another council election has come and gone in Camden and in the Wollondilly Shire but it won’t be forgotten too quickly in either.

Camden was shocked by how popular Mt Annan butcher Robert Mills was the second councillor elected after the count got under way on September 10.

And in the Shire a big majority of residents voted a resounding Yes in the referendum to have future mayors elected by popular vote and to reduce the number of wards from three to two.

The referendum question was:

Do you favour the election of the Mayor by electors for a four (4) year term with the number of Wards reduced from three (3) to two (2), each Ward comprising of four (4) Councillors, plus a popularly elected Mayor?

The Yes case won handsomely with almost 66 percent of the vote, while the No case was supported by a little over 34 percent.

It means that in four years’ time Wollondilly residents will directly elect their mayor for a four year term, same as they do in Liverpool.

The nine councillors elected for the next four years were:

Over the Razorback Mountain in Camden, the Liberal Party now has four seats on the council, down one from the previous term.

Labor has three councillors and there are two independents.

One is the perennial Eva Campbell.

The other is the Mt Annan butcher himself, Robert Mills, who has stunned Macarthur with his incredible victory.

As Cr Campbell would not be expected to support the Liberal Party, it looks like Councillor Butcher will have the balance of power over the next four years, including deciding who becomes mayor.

Indeed the mayoral vote will be a fascinating one, and don’t be surprised to see Cr Campbell, Cr Mills and Labor sharing the spoils over the next four years.

It may just be a case of ABTL – Anyone But The Libs.

Those elected to Camden Council were: