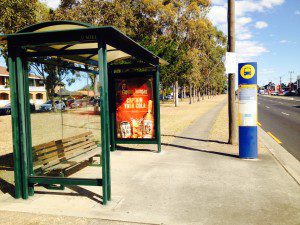 Shelter from the storm on the Hume Highway at Casula.

Bus commuters in Liverpool rejoice: Liverpool Council will start building more shelters from next year in a bid to catch up with a backlog nearing the half century mark.

They can thank Councillor Anne Stanley, who tabled a notice of motion at council’s last meeting on July 30, calling for more money for shelters in this year’s and future budgets.

In her notice of motion, Cr Stanley said that since 2008 the number of bus shelters provided by council every year has steadily decreased to just three in the 2014-15 financial year.

‘‘This will leave a backlog of at least 40 bus shelters,’’ Cr Stanley told council.

‘‘The provision of bus shelters supports the public transport strategy and provides shelter for residents against the elements, especially those whose mobility is impaired, those with young

children or the elderly.

‘‘For some of these groups public transport is their only option and should be encouraged and supported.’’

Cr Stanley conceded the provision of bus shelters was of significant expense to council’s Budget, so she was asking that council explore cost effective ways to provide such a community resource.

Her call was supported by council, which will now investigate options to provide more shelters by:

a)      increasing the number of sponsored or advertising shelters having full regard to sensitive areas and the advertising that is allowed near schools and churches;

year over the next five years commencing with the 2015-16 budget year;

can reduce the cost of shelters;

2. Be consulted on the final design of bus shelters.

More than 40 years experience in the news media, most of them as editor of local newspapers across the Sydney metro area, but a few years working as a sub-editor with the metros. Lots of awards, both as a reporter and editor, but says he values just as much Community Service Awards from Campbelltown City Council in 2004 and 2016. Took a voluntary redundancy in 2014 from Fairfax Community Newspapers after 21 years there. Loves the digital world, because ''there's no question it's the future''. Eric promises his hard hitting but fair approach won't change when he reports the news via cyber space.
View all posts by Eric Kontos
Liverpool mayor Ned Mannoun guest speaker at networking event
Repair plan for Liverpool Council admin centre